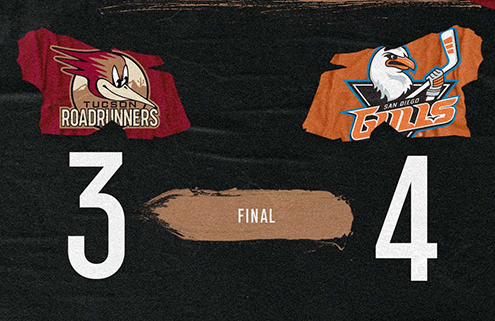 San Diego, California – The Tucson Roadrunners kicked off a three-game road trip Wednesday night at the Pechanga Arena, as they took on the San Diego Gulls for the fifth time this season. Wednesday’s game saw the score tied at 0-0, 1-1, 2-2, and 3-3 with each team holding the lead twice, as the Gulls came away with a 4-3 win. Ivan Prosvetov made his 13th consecutive start in net for the Roadrunners and recorded 25 saves.

Watch Tucson forward Mitch Lewandowski get the Roadrunners on the board in Wednesday night’s matchup, as the 23-year-old netted his first professional goal with 4:04 left in the first period. Lewandowski has two points (1g 1a) in his last two outings with the Roadrunners after joining the team from Michigan State University, where he recorded 19 points (7g 12a) in 21 games played.

FIRSTS FOR OUR FORWARDS – Wednesday night represented a milestone game for three Roadrunners forwards: Mitch Lewandowski, Stephen Baylis and Colin Theisen. Lewandowski netted his first professional goal to open the scoring for Tucson in the first period, while Baylis notched his first AHL point with an assist in the second period. The game marked the professional debut for Colin Theisen after joining the Roadrunners roster by way of Arizona State University.

Roadrunners forwards Ben McCartney and Hudson Fasching celebrate after a go-ahead goal scored by Fasching in the second period of Wednesday’s contest with the San Diego Gulls. McCartney (2a) and Fasching (1g 1a) each posted multiple-point outings against the Gulls and represent Tucson’s active scoring leaders on the season.

“It’s been a heck of an experience, I’ve had a lot of fun ever since I got here. The guys have been great and nothing but good things to say about the coaching staff. I’m happy to be a part of the team and contribute in any way possible.”

Roadrunners forward Mitch Lewandowski on scoring his first professional goal in Wednesday’s matchup with the San Diego Gulls, his sixth game since joining the Roadrunners earlier in March.

San Diego struck first with a goal 8:26 into the contest to take a 1-0 lead. The score marked only the second time in five meetings on the season that the Gulls got on the board first. Tucson evened the score at one with 4:04 still to play in the first period, as Mitch Lewandowski found the back of the net for his first professional goal. The 23-year-old skated on the top line alongside Captain Hudson Fasching and Alternate Captain Travis Barron, with Fasching recording the primary assist on the first period score. Tucson and San Diego remained tied at one as they entered the second period, as the Gulls went on their first power-play of the night less than a minute into the middle frame. The Roadrunners fended off the San Diego man-advantage before taking their own trip to the power-play 6:04 into the period. Tucson used the advantage to take their first lead of the night 52 seconds into the power-play. The goal was scored by Hudson Fasching for his 11th of the season and sixth while on the power-play. Fasching contributed to each of the Roadrunners first two goals to earn his second multi-point outing in the last three games. A fight broke out 25 seconds after the go-ahead goal, Tucson’s Cam Crotty dropped the gloves with San Diego’s Alex Limoges for Crotty’s second bout of the season. The Gulls evened up the score at 2-2 just 18 seconds after the fight and 43 seconds after the Fasching goal. The back-and-forth scoring continued in the final four minutes of the middle frame, when Cole Hults retook the lead for Tucson with his sixth score of the season. The first-year Roadrunner leads all Tucson defensemen in goals and has recorded six points (3g 3a) in his last five games. San Diego once again had an answer for Tucson, as they tied it back up at 3-3 37 seconds after the Hults goal. The Roadrunners and Gulls entered the final 20 minutes of play with the score tied for the second time in their last three meetings this season. San Diego’s Alex Limoges completed the hat trick and gave the Gulls a 4-3 lead with a power-play goal near the midway point of the third period. Tucson’s comeback attempt came down to the final face-off with five seconds left on the clock, but several last second chances wouldn’t quite go as the Gulls came away with the 4-3 victory.

The Roadrunners will head to Las Vegas for a two-game set with the Henderson Silver Knights Friday and Saturday at the Orleans Arena. Friday’s series opener is scheduled for 7:00 p.m. MST, with coverage beginning at 6:45 p.m. MST on Fox Sports 1450AM with Roadrunners Warm-Up hosted by Jimmy Peebles. Then, “Voice of the Roadrunners” Adrian Denny will have all the action live from Las Vegas.