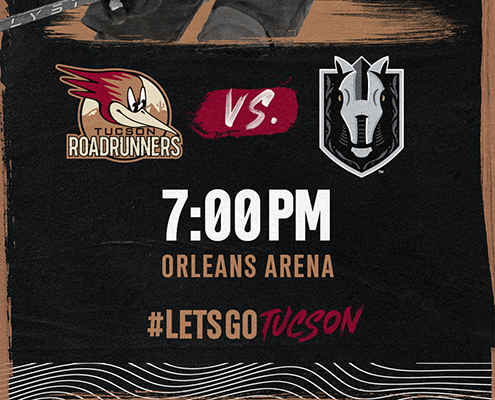 The Tucson Roadrunners head to Las Vegas to take on the Henderson Silver Knights for the final two times this weekend at the Orleans Arena. The first game of the back-to-back series is Friday night, as the Roadrunners reach the midway point of their current road trip. Friday’s contest marks the first meeting between Tucson and Henderson since February 20. The weekend series with the Silver Knights will round out the month of March for the Roadrunners, as they’ll return to the Tucson Arena for four games in six nights starting Friday, April 1.

Three Things
1) Tucson and Henderson have had their matchups come down to the wire this season. Two of their six meetings have gone past regulation, and three have been decided by just one goal. Over their last two-game set at the Tucson Arena February 19 and 20, the Roadrunners won the series opener by a score of 4-3. In that game, Tucson overcame a late 3-2 deficit with a pair of power-play goals in the third period. The Roadrunners have tallied three multi-goal periods in their last four contests with the Silver Knights, including back-to-back goals by Travis Barron in the opening 6:20 on December 14 in Tucson. The outing marked Barron’s first multiple-point performance of the season and first two-goal game of his AHL career.

2) Providing the scoring for Tucson in Wednesday’s contest with the San Diego Gulls were three former members of the Big-10 Conference. Mitch Lewandowski (Michigan State University), Hudson Fasching (University of Minnesota) and Cole Hults (Penn State University) each lit the lamp against the Gulls in San Diego, as Fasching and Hults each produced multiple-point performances. In all, the Roadrunners skated 14 former college hockey players Wednesday night at the Pechanga Arena, including all six defensemen.

3) A constant contributor to the Tucson offense while on the road this month has been their special teams. The Roadrunners have scored a power-play goal in each of their last three road matchups, after Hudson Fasching cashed in on the man-advantage Wednesday night in San Diego. Tucson enters the weekend with Henderson with the third-best road power-play percentage (22.3%) in the AHL Pacific Division. They’ll be facing a Henderson penalty-kill unit that ranks third-lowest in the division while on home ice. The Roadrunners will have to make the most of their trips to the man-advantage, as the Silver Knights surrender the second-fewest penalty minutes in the division at home.

“I thought it was good to get the first game out of the way. At first you kind of overthink things and the game moves fast, but I’m looking forward to getting back after it [Friday].”

Roadrunners forward Colin Theisen on joining Tucson by way of Arizona State University earlier this week. The 24-year-old made his professional debut Wednesday night in San Diego, firing off a pair of shots and finishing the contest with an even rating.

Number to Know
5 – The number of shots on goal recorded by forward Mitch Lewandowski in Wednesday’s matchup with the San Diego Gulls, tied for the most in the contest and leading the Roadrunners. The mark represented a new season-high through six games for Lewandowski, as 23-year-old netted his first professional goal in the first period for Tucson. Lewandowski joined the Roadrunners from Michigan State University on March 11 during their last road trip and has two points (1g 1a) over his last two outings.

We’re Doing It Live
Tonight’s game will be broadcast on AHLtv, as well as on the radio on Fox Sports 1450AM or on the iHeartRadio app. Coverage begins at 6:45 p.m. MST with Roadrunners Warm-Up, as Jimmy Peebles gets you ready for the game before “Voice of the Roadrunners” Adrian Denny has the call at 7:00 p.m. live from the Orleans Arena in Las Vegas.

RRTV In The Community: Dusty’s Read-Along
Scroll to top