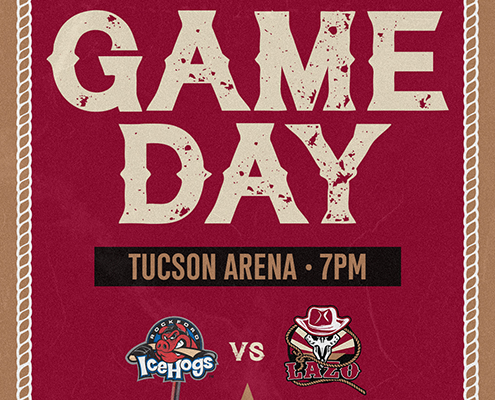 The Tucson Roadrunners return home to open the month of April with four games in six days at the Tucson Arena. The stretch begins Friday night with the first of back-to-back matchups with the Rockford IceHogs, AHL affiliate of the Chicago Blackhawks. The pair of contests mark the first meetings with Rockford since the 2018-2019 season and first trip to Southern Arizona for the IceHogs since October 19 and 20 of 2018. Friday’s game is also the final El Lazo de Tucson Night of the season, as the Roadrunners will don their alternate identity celebrating Tucson’s rich heritage and culture. The team has made game worn El Lazo jerseys available for purchase by way of raffle, auction, or buy now options. Fans can get their piece of the Roadrunners sixth season in the desert HERE.

Three Things
1) The Roadrunners enter the weekend with Rockford having won two of their last three series openers at home, as well as four of their last five two-game series openers overall. Tucson is 3-1 in their last four Friday night contests with two-straight come-from-behind wins. In just six Friday home games this season, the Roadrunners possess a 4-2 record with an average margin of victory of 2.25 in those wins. As for Rockford, the IceHogs have had four consecutive Friday contests decided by just one goal with each of the last two going past regulation. The Roadrunners take on the IceHogs Friday with a 12-5-4-1 record in one-goal games so far this season.

2) Tucson begins a four-game home stand on an impressive special-teams run. The Roadrunners have scored a power-play goal in each of their last five contests, and in 10 of their last 12 matchups at the Tucson Arena. In the series opener with Henderson on Friday, March 25, Tucson tallied a pair of power-play goals in the third period to secure a 6-3 victory. The frame marked the fourth period with at least two power-play goals this season for the Roadrunners. The man-advantage goals were scored by Ty Emberson and Colin Theisen, each representing their first professional power-play strikes. Tucson also held the Silver Knights scoreless on the man-advantage to match a season-best seven-for-seven on the penalty-kill in their last game on Saturday, March 26.

3) The Roadrunners had several key players back in the lineup last weekend against the Henderson Silver Knights. Forwards Blake Speers and Terry Broadhurst, as well as defenseman Victor Soderstrom returned to the ice after missing time due to injury. All three contributed to Tucson’s series sweep of the Silver Knights, including a three-point (1g 2a) performance from Broadhurst last Friday, March 25. The 33-year-old notched 152 games in four seasons and two separate stints with the Rockford IceHogs, including all four matchups between Tucson and Rockford in the 2018-2019 campaign, the last time these teams faced-off.

“It’s unreal playing at home, getting to sleep in our own beds and playing in front of these great fans at the TCC. We’re looking forward to this stretch.”

Roadrunners forward Tyson Empey on the advantages of a four-game home stand at the Tucson Arena. Eight of Tucson’s final 13 games of the regular season will be played on their home ice.

Number to Know
6 – The number of consecutive games against Central Division opponents for the Roadrunners beginning Friday night against Rockford. Four of Tucson’s next six games are against the IceHogs, split by a pair of midweek matchups with the Iowa Wild. The next six games will conclude the Roadrunners out-of-division schedule, with the final seven games of the season against Pacific Division rivals Colorado (two games), Stockton (one game), Bakersfield (one game) and San Diego (three games).

We’re Doing It Live
Today’s game will be broadcast on AHLtv, as well as on the radio on Fox Sports 1450AM or on the iHeartRadio app. Coverage begins at 6:45 p.m. MST with Roadrunners Warm-Up, as Jimmy Peebles gets you ready for the game before “Voice of the Roadrunners” Adrian Denny has the call at 7:00 p.m. live from the Tucson Arena