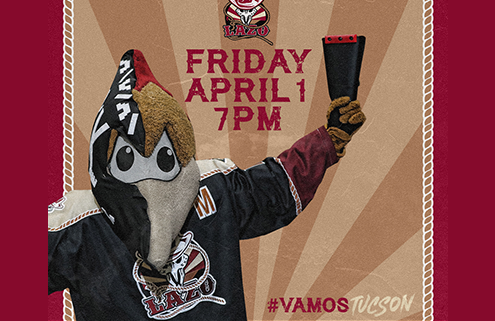 Tucson, Arizona – The Tucson Roadrunners, owned and operated by the Arizona Coyotes return home for four games in six nights starting Friday with El Lazo de Tucson presented by the City of Tucson.

The Roadrunners return home after outscoring Henderson 9-4 in a two-game series last week in Las Vegas.

Friday will be the team’s final El Lazo de Tucson of the year with a Fiesta Friday featuring food trucks and Mariachi Los Diablitos from Sunnyside High School.

The team’s game worn El Lazo jerseys for the year are currently up for auction, raffle or to buy now at TucsonRoadrunners.com/LazoJerseys with all proceeds benefitting Boys & Girls Clubs of Tucson and Mariachi Los Diablitos. The jersey event will run until Friday at 9 p.m.

There will also be player signed Mystery Pucks available for $25 at the Roadrunners Give Back Table at the top of Section 216.

About El Lazo de Tucson
The Roadrunnners ‘El Lazo’ identity is a continuing effort to embrace all that is Southern Arizona and the history and culture of the community. The El Lazo mark features the skull of a Roadrunner in celebration of Dia de Los Muertos and the All Souls Procession (a public ceremony began in Tucson in 1990). El Lazo, Spanish for ‘lariat’ or ‘lasso’, is taken from the City of Tucson’s city seal that ties together the modern city and the historic area that is now Tucson. The Tucson Rodeo and Parade is held every February and celebrates the ranching history of the area. The skull in the logo is wearing a cowboy hat to reflect this historic tradition in Southern Arizona. The team unveiled their El Lazo identity in 2020 and skated in their El Lazo jerseys for three games during the 2020-2021 season.  2021-2022 marks the team’s second season featuring games in their El Lazo identities.