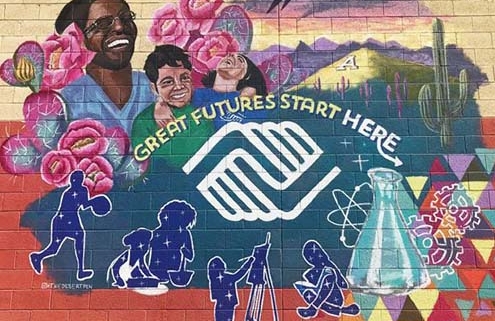 Tucson, Arizona – The Tucson Roadrunners, owned and operated by the Arizona Coyotes, seek experienced and talented visual artists, artist teams, and arts organizations to create a unique mural installation on a shipping container located next to the roller hockey rink (DEK Hockey) at the Boys & Girls Club at 3155 E Grant Road.

This Request for Qualifications (RFQ) is open to professional artists, artist teams, and arts organizations working in the visual arts who possess the appropriate knowledge, creative, technical expertise, and administrative capacity to complete this project in a timely manner. This mural is intended to tie into the beautification process of the roller hockey rink. The general theme should be related to the Tucson Roadrunners, Boys & Girls Club, hockey, and Tucson. The mural must cover the entirety of the 2 long side walls of the shipping container. We ask that students who attend this Boys & Girls Club location be included in the mural process at some point during the painting process.

Total mural commission is $2,500, with an additional budget to cover supplies (up to $500).  All interested artists should submit their resume, sample of past works, and a statement of interest directly to the Tucson Roadrunners at, TucsonRoadrunners.com/Mural no later than Tuesday, April 12.  The mural reveal is scheduled to take place in early to mid-May.  Please direct any questions to Kayla Miller at kayla.miller@tucsonroadrunners.com.

The Roadrunners return home Friday and Saturday to begin four games in six nights at Tucson Arena starting with El Lazo de Tucson Friday and Autism Acceptance Night Saturday before the home stand continues Tuesday and Wednesday April 5 and 6 at 6:30 p.m. All of the details can be found at TucsonRoadrunners.com/Fun.

Followon TwitterSubscribeto RSS Feed
Tucson Roadrunners Road Ahead: Not Fooling Around In April