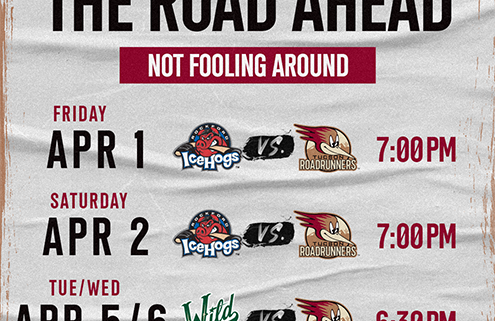 Tucson Roadrunners Road Ahead: No Fooling Around In April

The Roadrunners return home to open the month of April with four games in the span of six days at the Tucson Arena. Tucson will play host to the AHL affiliate of the Chicago Blackhawks, the Rockford IceHogs for the first time since the 2018-2019 season with a pair of contests Friday and Saturday night. The Roadrunners enter the series after back-to-back wins over the Henderson Silver Knights, while the IceHogs come into town after a midweek matchup with the Milwaukee Admirals Tuesday night in Rockford.

Hitting The Jackpot With Henderson

The Roadrunners return to Tucson fresh off of a series sweep of the Henderson Silver Knights Friday and Saturday in Las Vegas. After falling behind 2-0 in the first period of the series opener, Tucson outscored Henderson 9-2 over the rest of the weekend. The Roadrunners won back-to-back games by at least two goals for the first time all season, fueled by strong weekends from Ben McCartney (2g 1a), Terry Broadhurst (1g 2a), Boko Imama (1g 2a) and more. Ivan Prosvetov started in net for both contests and stopped 60 of 64 shots faced. Prosvetov’s outings last weekend extended his team record for consecutive appearances by a goaltender to 15. Tucson tallied three power-play goals over the weekend and matched their season-best penalty-kill performance on Saturday, holding the Silver Knights scoreless in seven trips to the man-advantage.

Friday’s series opener with Rockford will be the Roadrunners final El Lazo de Tucson game of the season, presented by the City of Tucson. The team will once again take on their alternate identity celebrating the rich culture and heritage of Tucson and Southern Arizona. The Roadrunners will wear their special edition El Lazo uniforms for the game, and Mascot Dusty will be at the Tucson Arena as his alter-ego “El Polvo.” A variety of food trucks will be featured outside the Arena and Sunnyside High School’s Mariachi Band, Mariachi Los Diablitos de Sunnyside, will be back for another performance. To celebrate the final El Lazo Night of the season, the team has made their game-worn jerseys available with raffle, auction, or buy now options. The event is active now and runs until Friday, April 1 at 9:00 p.m. MST, with all purchase options available HERE. Fans can purchase an El Lazo Ticket Pack that includes four tickets to the game, two El Lazo T-Shirts and an El Lazo Puck, good for $50 in savings. The special package can be found HERE. Also available for Friday’s game are Party Packs that include two discounted seats and $20 in concessions, which can be found HERE.

Saturday’s matchup with the Rockford IceHogs is Autism Acceptance Night at the Tucson Arena. The first 1,000 fans will receive sensory pop pads courtesy of Pizza Hut, with special accommodations and ticket packages available for all fans. For complete details, the team has created an Autism Acceptance web page that can be found HERE.

Families can purchase a special package that includes four tickets and $20 concessions, good for $40 in savings, HERE. Also available after the Roadrunners strong special-teams performances last weekend is the Extra Attacker Pack. The pack includes six vouchers for any game with a $50 food voucher and can be found HERE.

Following the weekend series with the Rockford IceHogs, the Roadrunners will welcome the Iowa Wild into town for the first time since October 2019. Tucson and Iowa will face off Tuesday and Wednesday at the Tucson Arena, with both contests scheduled for 6:30 p.m. MST. Both games will feature $5 draft beers and half-priced tickets for students and military. For more information and to purchase tickets, click HERE. The Roadrunners and Wild met earlier this season for a pair of games in Iowa, splitting the series at one win apiece. The series marked the Roadrunners debut for forward Terry Broadhurst.

Jan Before You Know It

Forward Jan Jenik returned to the Roadrunners roster last Friday in Las Vegas from the Arizona Coyotes. In his first game back with the team, the 21-year-old tallied a goal and an assist on back-to-back scores in the second period to erase a 2-0 deficit. The 2018 third-round draft pick was one of seven Roadrunners to record a multiple-point performance in the 6-3 come-from-behind victory. After the impressive outing, Jenik was recalled to the Arizona Coyotes Monday Morning.

Fresh Faces Find The Back Of The Net

The Roadrunners saw offensive contributions from all across the lineup during last week’s three-game road trip against the San Diego Gulls and Henderson Silver Knights. Opening the scoring on the trip was forward Mitch Lewandowski. Lewandowski’s first period score against San Diego marked the 23-year-old’s first professional goal after joining the team from Michigan State University. Forward Stephen Baylis from the ECHL’s Rapid City Rush tallied his first AHL point with an assist on Tucson’s third goal of the contest late in the second period. Baylis finished the three-game road trip at plus-two. The Roadrunners newest skater, Colin Theisen from Arizona State University, made his professional debut Wednesday, March 23 in San Diego. In his second game with the team on Friday, March 25, the 24-year-old recorded the first two points of his professional career with a goal and an assist in the 6-3 win over Henderson.

A Gordie Howe Hat Trick is when a player records a goal, an assist and a fight in the same game. Roadrunners forward Ben McCartney accomplished the feat on Friday, March 25 against the Henderson Silver Knights. The 20-year-old dropped the gloves one minute into the contest with Henderson’s Brayden Pachal for his third bout of the season. McCartney then tallied an assist on Tucson’s first goal of the night just 26 seconds into the middle frame, before finding the back of the net himself with 7:03 gone by in the period to complete the Gordie Howe Hat Trick. McCartney was an assist away from a second-straight Gordie Howe Hat Trick in Saturday’s game, after tallying another goal and fight in the 3-1 victory.

Out Of Division Details

Tucson and Rockford split the season series with two wins apiece in the 2018-2019 campaign, which included a 4-3 Roadrunners overtime victory on home ice Friday, October 19. Appearing in all four outings for Rockford was current Roadrunner Terry Broadhurst. The AHL affiliate of the Chicago Blackhawks is currently fourth in the Central Division with a 28-23-4-1 record. Tucson’s weekend series with Rockford kicks off a stretch of six-straight matchups against AHL Central Division squads. Tucson has tallied a power-play goal in each of their last two Central Division contests and recorded a multi-goal period in three of the six outings. In their last season featuring multiple Central Division opponents (2019-2020), the Roadrunners finished with a combined 11-3 record against San Antonio, Texas, Chicago, and Iowa.

Mike And Vlad Make Noise In The NHL

While Tucson was taking on the Silver Knights in Las Vegas Friday night, a pair of former Roadrunners were making their mark in the National Hockey League with the Arizona Coyotes. Forward Mike Carcone and defenseman Vlad Kolyachonok each recorded their first career NHL goals on the road against the Calgary Flames. Carcone was the first to light the lamp, as he ripped a shot from the right-wing face-off circle that found the back of the net with 12 seconds remaining in the middle frame. Kolyachonok followed up Carcone with 1:53 still to play in regulation, as his one-timer from the center of Calgary’s zone made it past backstop Jacob Markstrom. Assisting on Kolyachonok’s goal was fellow former Tucson blue-liner Cam Dineen.