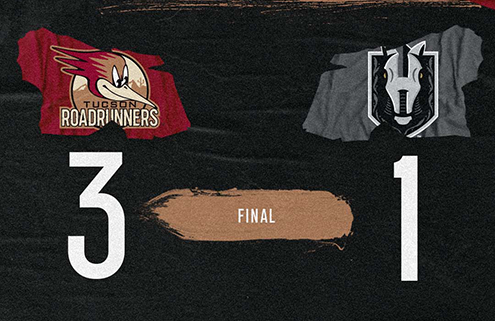 Las Vegas, Nevada – The Tucson Roadrunners concluded their weekend series against the Henderson Silver Knights Saturday afternoon with a 3-1 win at the Orleans Arena in Las Vegas. After Ben McCartney got the Roadrunners on the board 13 minutes into the contest, Tucson led the rest of the way to sweep the Silver Knights in their final two meetings of the season. The Roadrunners penalty-kill finished the night a perfect seven-for-seven against the Henderson power-play. Ivan Prosvetov started in net for Tucson and stopped 32 of 33 shots faced for his best save percentage since March 5 in Bakersfield. Prosvetov was taken out for the latter half of the first period after sustaining an injury from a high stick but returned for the final 40 minutes of play. David Tendeck filled in for Prosvetov during the opening frame and turned all four shots faced aside.

Watch Tucson Roadrunners forward Ben McCartney open the scoring in Saturday’s 3-1 victory over the Henderson Silver Knights with a power-play goal in the first period. The goal marked McCartney’s 12th of the season and gave the 20-year-old five points (2g 3a) in his last three games. McCartney finished the weekend with a fight in each outing with Henderson, both against Brayden Pachal.

SPECIAL-TEAMS SATURDAY – One of the biggest takeaways from Saturday’s 3-1 Roadrunners win was Tucson’s penalty-kill unit. The Roadrunners faced and defended all seven of Henderson’s trips to the man-advantage, including 1:29 of a five-on-three advantage and a four-minute chance in the second period. On the other side of the ice, Tucson tallied a power-play goal for the fifth-straight contest after a pair of special-teams scores in the series opener Friday night.

Roadrunners defenseman Victor Soderstrom returned to the Tucson lineup for the first time since February 7 Saturday afternoon against the Henderson Silver Knights. The 21-year-old tallied an assist on the Roadrunners first goal of the night and recorded three shots on goal to lead all Tucson defensemen. Soderstrom was drafted by the Arizona Coyotes in the first round (11th overall) of the 2019 NHL Draft.

“It was an awesome weekend. It’s always nice to win here in Vegas and a back-to-back. We always want the back-to-back wins on the road so it was a big weekend. Lots of guys stepped up and that was great.”

Roadrunners goaltender Ivan Prosvetov on Tucson’s performance over the weekend series with Henderson that saw the Roadrunners win back-to-back matchups against the Silver Knights.

The game started slowly in the first period, before Tucson goaltender Ivan Prosvetov took a stick up high to force him out of the game at the midway point of the opening frame. The Roadrunners were awarded a four-minute power-play after the hit and used it to take a 1-0 advantage. The goal was scored by Ben McCartney for his 12th time lighting the lamp this season and extended his active point streak to three games. Prosvetov and back-up netminder David Tendeck combined for a perfect first period with nine shots faced, as Tucson entered the middle frame leading 1-0. With Ivan Prosvetov back in goal, the Roadrunners began the second period by fending off 1:29 of a five-on-three power-play for Henderson before going back the other way to extend their lead to 2-0. The goal was scored by Boko Imama for his fifth of the season, giving the 25-year-old his third point of the weekend against the Silver Knights. Henderson got on the board with 8:09 still to play in the second period, cutting Tucson’s lead to one. The Silver Knights had a chance to tie the contest up at two with a four-minute man-advantage late in the period, but the Roadrunners penalty-kill came up big once again. Tucson’s PK unit was a perfect six-for-six through the first 40 minutes of play, as the Roadrunners still led 2-1 with 20 minutes remaining in regulation. Despite facing a barrage of 14 shots in the third period, Ivan Prosvetov and Tucson kept the Silver Knights out of the back of the net. Travis Barron added an empty-net score for the Roadrunners with 2:23 left in regulation, as Tucson secured a 3-1 win and series sweep of the Silver Knights.

The Roadrunners will return home to take on the Rockford Ice Hogs for the first time since February 2019 at the Tucson Arena Friday and Saturday. Friday’s series opener is scheduled for 7:00 p.m. MST, with coverage beginning at 6:45 p.m. MST on Fox Sports 1450AM with Roadrunners Warm-Up hosted by Jimmy Peebles. Then, “Voice of the Roadrunners” Adrian Denny will have all the action live from the Tucson Arena.

Tucson Roadrunners Road Ahead: Not Fooling Around In April
Scroll to top