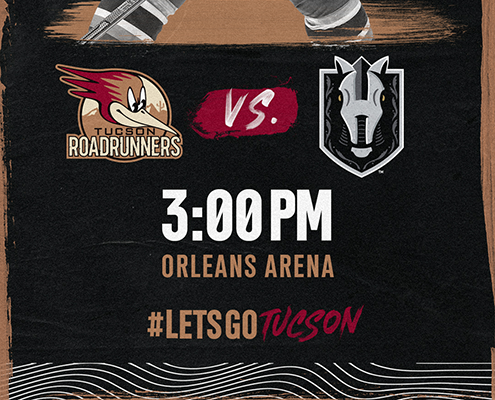 The Tucson Roadrunners conclude their season series against the Henderson Silver Knights Saturday afternoon, with a matinee matchup at the Orleans Arena beginning at 3 p.m. MST. Tucson will look for their second-straight win over the Vegas Golden Knights AHL affiliate after a 6-3 come-from-behind victory in the series opener Friday night. In that game, the Roadrunners overcame an early 2-0 deficit with four goals in the first 9:04 of the second period, followed by a pair of power-play strikes in the final 3:47 to secure the win.

Three Things
1) The Roadrunners scored in bunches Friday night when they defeated the Silver Knights 6-3 to open the weekend series. Tucson tallied four-straight goals in the second period after falling behind 2-0, representing their first four-goal period of the season. Their back-to-back multi-goal frames on Friday were their 37th and 38th multiple-goal periods of the season, and the eighth game with more than one multi-goal period this year. The four-goal second period was the 13th time scoring three or more goals in a period this season and first game with at least four goals in a frame since May 1, 2021 in San Diego.

2) After winning eight of their last nine games by a single goal, Tucson opened it up Friday with their seventh win of the season by at least two goals as they gathered their largest margin of victory since December 3. Their 6-3 win over Henderson also marked the second-straight series opening win against the Silver Knights, after a 4-3 victory back in Tucson on Saturday, February 19. Overall, the Roadrunners have a 2-1-1 record in series openers with Henderson, with both wins being comeback victories. Their six goals against the Silver Knights were a new season-high on the road for Tucson and the most against Henderson since they joined the AHL Pacific Division last season.

3) The Roadrunners tacked on a pair of goals while on the man-advantage late in the third period of Friday’s 6-3 win over Henderson, marking their fourth-straight road game with at least one power-play goal and six of their last seven contests overall. Tucson now has four power-play strikes in their last three matchups with the Silver Knights dating back to Saturday, February 19, when they netted back-to-back goals on the man-advantage in the third period for a comeback win. The Roadrunners are on pace for the best power-play percentage in franchise history at 21.5-percent overall and 23.7-percent while on the road, both currently stand at third-best in the AHL Pacific Division.

“That’s what it’s all about, persistence. You just keep going and try to do the right things and eventually the results will come. 14 games left now, we’ll keep playing as hard as we can and try to win as many as we can, and we’ll see what happens.”

Tucson forward Terry Broadhurst on the persistence of a Roadrunners team that has been able to produce come-from-behind wins all season long against their toughest division opponents.

Number to Know
7 – The number of Tucson skaters in Friday night’s series opener with Henderson to record multiple points. Leading the way was Terry Broadhurst with a goal and two assists in his first game back from injury, all recorded during the second period. Also tallying multiple points in the middle frame were Jan Jenik (1g 1a), Ben McCartney (1g 1a) and Cole Hults (1g 1a). McCartney finished the night with a Gordie Howe Hat Trick, as he dropped the gloves with Henderson’s Brayden Pachal in the first minute of the contest. In the third period, Andrew Nielsen (2a) and Boko Imama (2a) each factored into the pair of power-play goals. Finally, forward Colin Theisen (1g 1a) recorded his first professional points in only his second game with the Roadrunners.

We’re Doing It Live
Today’s game will be broadcast on AHLtv, as well as on the radio on Fox Sports 1450AM or on the iHeartRadio app. Coverage begins at 2:45 p.m. MST with Roadrunners Warm-Up, as Jimmy Peebles gets you ready for the game before “Voice of the Roadrunners” Adrian Denny has the call at 3:00 p.m. live from the Orleans Arena in Las Vegas.