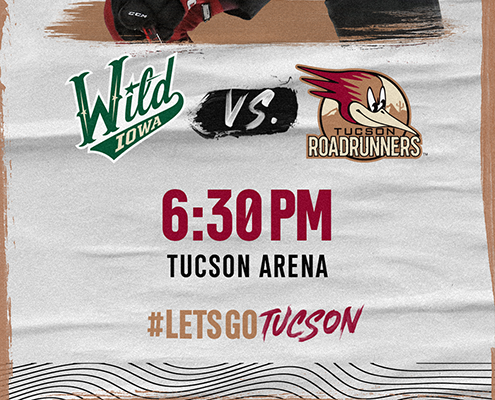 The Roadrunners continue their four-game home stand with a pair of midweek matchups against the Iowa Wild Tuesday and Wednesday at the Tucson Arena. Tuesday’s series opener marks the Minnesota Wild AHL affiliate’s first trip to the Old Pueblo since October 2019, and third total meeting between Tucson and Iowa on the season. The back-to-back contests with the Wild will conclude an all-Central Division home stand for the Roadrunners, after a pair of weekend games against the Rockford IceHogs Friday and Saturday.

Three Things
1) The Roadrunners and Wild previously faced off this season for a pair of games at the Wells Fargo Arena in Des Moines on November 19 and 21. Tucson took the series finale by a score of 2-1, with first period goals scored by Matias Maccelli and Terry Broadhurst. After Iowa scored a goal late in the opening frame to make it a 2-1 game, the Roadrunners kept the Wild off the board for the final 42:03 of the contest. The victory marked the beginning of a four-game win streak for the Roadrunners, as well as the first of four-straight meetings with Central Division opponents that were decided by just one goal. Tucson has forced overtime in two of their last three out-of-division matchups, including last Friday against the Rockford IceHogs.

2) Entering the series with Iowa on a recent hot streak is Tucson forward Terry Broadhurst. The 33-year-old has five points (2g 3a) in his last four outings, including a point in two-straight contests against his former team, the Rockford IceHogs. In all, Broadhurst has recorded a point in four of six games against Central Division teams since joining the Roadrunners, after spending five of his first six seasons in the AHL as a member of the Central Division. The goal by Broadhurst in the last meeting between Tucson and Iowa on November 21 was the eventual game-winner.

3) The last time Tucson and Iowa met this season on November 19 and 21, current Roadrunners defenseman Doyle Somerby took the ice as a member of the Wild. Somerby appeared in both games for Iowa and started in the series finale, as the Roadrunners and Wild split the weekend series in Des Moines. After playing in 24 games with the Roadrunners in the 2020-2021 season, the 27-year-old was then re-acquired by Tucson on January 4 from the Wild. Somerby has posted seven points (1g 6a) in 30 games with Tucson this season and enters the week with an assist in his last outing on Saturday, April 2 against Rockford.

“Sticking to the game plan. The coaches come up with the game plan and it’s our job to follow it. I say this a lot but by keeping our game simple and by doing the right things, we tend to get good bounces on our end.”

Roadrunners forward Cedric Lacroix on the driving force behind Tucson’s recent early scoring. The Roadrunners have scored a goal in the first five minutes of each of their last two contests and got on the board 5:37 into their last meeting with the Iowa Wild.

Number to Know
500 – The number of tickets provided by the Jim Click Automotive Team for local students and families in Pima County Schools to attend Tuesday’s matchup between the Tucson Roadrunners and Iowa Wild. Beginning at 5:15 p.m., families in Pima County Schools can collect the tickets at Window 2 of the Tucson Arena Box Office, with an additional 500 tickets available for Wednesday’s game as well.

We’re Doing It Live
Today’s game will be broadcast on AHLtv, as well as on the radio on Fox Sports 1450AM or on the iHeartRadio app. Coverage begins at 5:00 p.m. MST with a special extended pregame edition of Roadrunners Happy Hour with “Voice of the Roadrunners” Adrian Denny and Brett Fera from the Arizona Daily Star. Then, Jimmy Peebles will get you ready for the game with Roadrunners Warm-Up, before “Voice of the Roadrunners” Adrian Denny has the call at 6:30 p.m. live from the Tucson Arena.