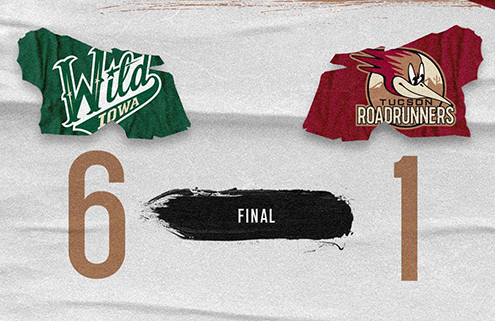 Tucson, Arizona – The Tucson Roadrunners met with the Iowa Wild Tuesday night for the first matchup of a two-game series at the Tucson Arena. The Roadrunners scored first for the fourth-straight contest, but Iowa battled back to take the series opener 6-1. Ben McCartney tallied the goal on Tucson’s first power-play of the night for his 14th time lighting the lamp this season. Goaltender Josef Korenar was in net for his second consecutive outing with Tucson and recorded 36 saves.

Watch Tucson Roadrunners forward Ben McCartney open the scoring in the first period of Tuesday’s series opener with the Iowa Wild. The goal marked McCartney’s 14th tally of the season and seventh while on the man-advantage, both leading the active Tucson roster.

SODA ON THE MENU – Roadrunners defenseman Victor Soderstrom returned to Tucson after being recalled by the Arizona Coyotes earlier in the week. The 21-year-old tallied the primary assist on Ben McCartney’s first period goal Tuesday night against the Iowa Wild for his 12th assist of the year. His 12 assists are the most among active Roadrunners defensemen.

Roadrunners defenseman Doyle Somerby started against the Iowa Wild Tuesday night at the Tucson Arena. The 27-year-old was reacquired by Tucson from the Wild after appearing in 24 games with the Roadrunners during the 2020-2021 season. Somerby notched three shots on goal in the effort.

“I think points are one thing, but we have to play a more solid game. We have to be able to manage the game and play the right way.”

Tuesday’s action began with a power-play goal by the Roadrunners to take a 1-0 lead. Ben McCartney buried the goal on Tucson’s first man-advantage of the night with 10:33 gone by in the opening frame, his 14th tally of the season. The score marked the fourth-straight contest where the Roadrunners recorded the first goal. Iowa answered back with a goal on their first man-advantage to even at the score at 1-1 in the final 4:36 of the opening frame. The Roadrunners and Wild entered the first intermission still tied at one, with Tucson netminder Josef Korenar having turned aside 19 shots in the opening 20 minutes. The mark set a new season-high for saves in a period by a Roadrunners backstop. The Wild opened the scoring in the second period with a goal 6:41 into the middle frame to take their first lead of the contest at 2-1. Iowa added another goal just past the midway point of the period to extend their advantage to 3-1. The third and final goal of the period was scored by the Wild to make it a 4-1 lead with 3:56 to play before the second intermission. That goal was the second power-play strike by Iowa and third combined special-teams score of the contest. The final 20 minutes of action began with another Iowa goal, scored 5:56 into the frame by forward Kyle Rau to complete the hat trick. Another goal for the Wild 2:53 later made it a 6-1 advantage nearing the midway point of the third period. That score would hold for the final 11:11, as Iowa took the series opener at the Tucson Arena.

The Roadrunners will be back at the Tucson Arena Wednesday night for a rematch with the Iowa Wild to wrap up the four-game home stand. Wednesday’s series finale is scheduled for 6:30 p.m. MST, with coverage beginning at 6:15 p.m. MST on Fox Sports 1450AM with Roadrunners Warm-Up hosted by Jimmy Peebles. Then, “Voice of the Roadrunners” Adrian Denny will have all the action live from the Old Pueblo.