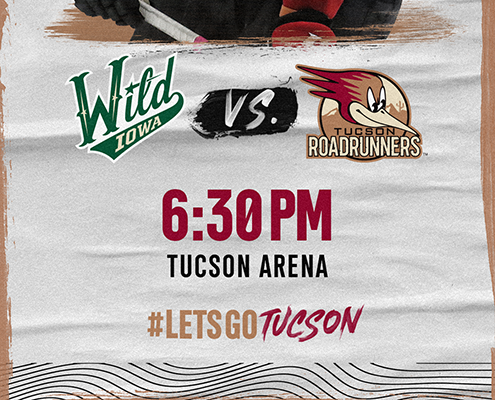 The Roadrunners wrap up their four-game home stand Wednesday night with the second of two games against the Iowa Wild at the Tucson Arena. The Wild took the series opener in their first trip to the Old Pueblo since October 2019. Wednesday’s contest marks the fourth and final meeting between Tucson and Iowa on the season.

Three Things
1) Continuing to provide the offense in the series opener against Iowa was Roadrunners forward Ben McCartney. The 20-year-old has seven points (4g 3a) in his last six games and is the active team leader for goals (14), points (30) and power-play goals (7). In all, McCartney has 35 points (15g 20a) in 53 regular-season outings since joining Tucson at the end of the 2020-2021 season and will become the sixth player to appear in 50 games this season for the Roadrunners when he takes the ice Wednesday night.

2) Returning to the Roadrunners ahead of Wednesday’s series finale with Iowa are forward Hudson Fasching and goaltender Ivan Prosvetov. Fasching played in three games in four nights during his latest stint with the Arizona Coyotes for 11 total outings on the year, setting a new career-high for NHL appearances in a season. The Roadrunners Captain returns to Tucson as the active team leader for points. Prosvetov made his fourth National Hockey League start Monday night as the Coyotes took on the Blues in St. Louis. The 23-year-old stopped all 10 shots faced in his first period of NHL action since January 14 and 24 saves total in the contest. He returns to the AHL currently ranking sixth for total minutes and saves, and set a new Tucson franchise record with 16-straight appearances in net the last time he was in a Roadrunners uniform.

3) Wednesday’s series finale with the Iowa Wild is the fourth of six consecutive Central Division matchups for the Roadrunners to conclude their out-of-division play this season. With ten games remaining in the regular season, Tucson still has matchups against the Iowa Wild (1), Rockford IceHogs (2), Colorado Eagles (2), Stockton Heat (1), Bakersfield Condors (1) and San Diego Gulls (3). After Wednesday’s meeting with the Iowa Wild, the Roadrunners will have a pair of two-game series remaining at the Tucson Arena. They’ll face the Colorado Eagles Friday, April 15 and Saturday, April 16 before wrapping up the regular season slate at home against San Diego Thursday, April 28 and Friday, April 29.

“I was super excited. There’s obviously a pretty big turnover with how many guys from last year’s team are up with the Coyotes, but the coaching staff is pretty similar with Jay [Varady] coming back down. I love this city and playing at the TCC, so it’s been good to be back.”

Roadrunners defenseman Doyle Somerby on when he found out he had been reacquired by Tucson earlier this season from the Iowa Wild. The 27-year-old appeared in 24 games with the Roadrunners during the 2020-2021 campaign.

Number to Know
2 – The number of players to appear in every outing for the Roadrunners this year with ten games remaining in the regular season. Both in their second seasons with the team, forward Cameron Hebig and defenseman Cam Crotty have suited up for all 58 of Tucson’s games so far. Hebig has matched his career-high for goals in a season with 11, while Crotty has appeared in all but four games since joining the Roadrunners for the 2020-2021 season out of Boston University.

We’re Doing It Live
Tonight’s game will be broadcast on AHLtv, as well as on the radio on Fox Sports 1450AM or on the iHeartRadio app. Coverage begins at 6:15 p.m. MST with Roadrunners Warm-Up, as Jimmy Peebles gets you ready for the game before “Voice of the Roadrunners” Adrian Denny has the call at 6:30 p.m. live from the Tucson Arena.