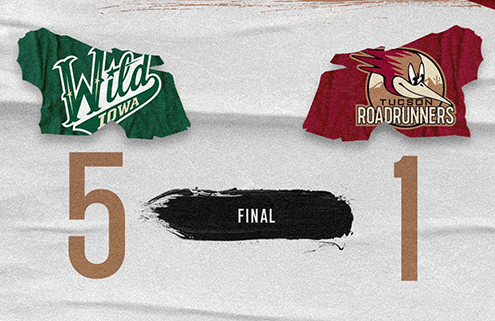 Tucson, Arizona – The Tucson Roadrunners wrapped up a four-game home stand Wednesday night, as they took on the Iowa Wild for the second-straight contest at the Tucson Arena. The Roadrunners scored a goal in the opening frame for a fifth consecutive outing, but Iowa netted the following four goals to take the series finale by a score of 5-1. Ivan Prosvetov returned between the pipes for Tucson after a start in the NHL with the Arizona Coyotes on Monday and made 34 saves in his fourth career start against Iowa.

Watch Tucson Roadrunners forward Travis Barron even the score at 1-1 in the first period with the Iowa Wild Wednesday night at the Tucson Arena. The goal was Barron’s 11th of the season, as the 23-year-old has posted 23 points (11g 12a) in 55 games with the Roadrunners, all career-bests at the AHL level.

FIRST PERIOD FIREPOWER – The Roadrunners tallied a first period goal for the fifth-straight contest Wednesday night as they took on the Iowa Wild. Tucson was the first team to score in the previous four games and lit the lamp in the first five minutes of two of their last three contests entering Wednesday.

Roadrunners Captain Hudson Fasching returned to the Tucson lineup for Wednesday night’s contest with the Iowa Wild. The 26-year-old tallied an assist on Travis Barron’s first period goal and has six points (3g 3a) in his last six outings for the Roadrunners.

“I think if you talk to [Barron], it’s really his first full year in the American Hockey League where he hasn’t been up and down. I think he cherishes those AHL reps. He plays hard every night and he’s there for us every night. He finds his way onto our penalty-kill and into key situations for us. He does a good job for us almost every night and is consistent.”

The Wild got on the board first with 3:56 gone by in the opening frame to take a 1-0 lead. The goal snapped the Roadrunners active four-game streak of scoring before their opponents. Despite not scoring first, Tucson still grabbed a goal in their fifth-straight opening frame. Travis Barron netted his 11th goal of the season to even the score at 1-1 with just under four minutes to play in the period. The Wild went on a late power-play and used it to retake the lead at 2-1 with one second left in the man-advantage and 26 seconds remaining in the period overall. Iowa extended their lead to 3-1 with the first goal of the middle frame, scored with 5:06 gone by in the period. Like the first period, the Wild added a power-play goal late in the frame, this time with 1:38 still on the clock to push their ad vantage to 4-1. Tucson upped their shots on goal total from the first period, as they sent 12 shots toward Iowa goaltender and former Roadrunner Zane McIntyre during the middle 20 minutes of action. The Roadrunners started the third period with a successful five-on-three penalty-kill in the first four minutes, keeping the deficit at three. After the longest scoring drought of the contest at 18 minutes and 50 seconds, the Wild netted the only goal of the third period with 2:48 still to play in regulation. The late goal made the score 5-1 and secured Iowa’s win in the series finale at the Tucson Arena.

The Roadrunners will head out on the road for a pair of weekend matinee matchups against the Rockford IceHogs Saturday and Sunday. Saturday’s series opener is scheduled for 4:00 p.m. MST, with coverage beginning at 3:45 p.m. MST on Fox Sports 1450AM with Roadrunners Warm-Up hosted by Jimmy Peebles. Then, “Voice of the Roadrunners” Adrian Denny will have all the action live from Rockford.