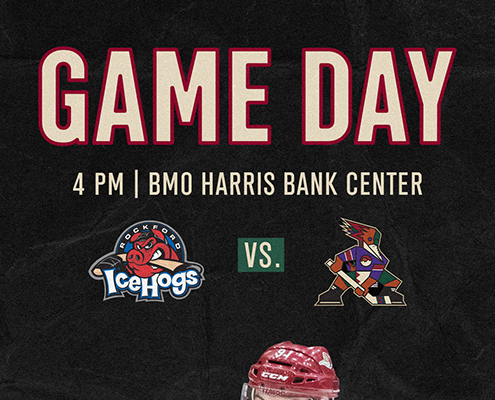 The Roadrunners head to Rockford this weekend for the first time since February 2019 to take on the IceHogs Saturday and Sunday at the BMO Harris Bank Center. The pair of contests with the Chicago Blackhawks AHL affiliate mark the final two out-of-division games this season for Tucson. The Roadrunners enter their fifth and sixth-straight games against Central Division opponents, as they’ll meet the IceHogs on Saturday for the third time in five games. A win would give Tucson their third-straight road victory, marking the longest streak this season.

Three Things
1) The Roadrunners and IceHogs met last weekend at the Tucson Arena for their first two meetings of the season on April 1 and 2. Tucson rallied back from a late 3-2 deficit to force overtime and earn a standings point to kick off the four-game home stand. The game marked the fourth-straight one-goal contest against Central Division opponents for Tucson, as well as the second consecutive out-of-division matchup to go to overtime. The IceHogs enter the weekend with two of their last four games decided by one goal, all against the AHL Pacific Division.

2) In both games against Rockford last weekend at the Tucson Arena, the Roadrunners got on the board first with early goals in the opening frame. It began in the series opener Friday, April 1, as rookie forwards Stephen Harper and Colin Theisen combined for back-to-back goals in the opening 5:12 of the contest. Fellow rookie Ben McCartney followed them up in the series finale Saturday, April 2 with a goal 4:12 into the first period to put the Roadrunners on the board. Tucson has scored in the first five minutes of 11 games this year, including in six of their last 12 road games.

3) Roadrunners forwards Ben McCartney and Terry Broadhurst have been providing the offense for Tucson over their recent slate of games. The 20-year-old McCartney has posted seven points (4g 3a) in as many games, including the first goal against Rockford in their last meeting on Saturday, April 2. McCartney is the active team leader for goals with 14 and is tied with Captain Hudson Fasching for the active lead in points with 30. Meanwhile, Broadhurst has recorded six points (2g 4a) in as many outings, including a point in each matchup with Rockford last weekend in Tucson. The former IceHog has five points (2g 3a) in eight games against Central Division opponents since joining the Roadrunners in November.

“In a perfect world, I’d love to be a leader every night, win out, and see what happens. That’s my goal. There’s no quit here, we talk about how we have to look forward and give everything we have.”

Roadrunners forward Travis Barron on what he’s looking for out of himself and the team with nine games remaining in the regular season.

Number to Know
4 – The number of opening games on the road decided by just one goal in Tucson’s last five trips. Among those four one-goal games are 4-3 wins over the Ontario Reign (December 18) and San Jose Barracuda (January 12). The Roadrunners have also ended two of their last four road trips with a one-goal contest, including a 3-2 overtime loss to the Texas Stars of the AHL Central Division on Saturday, March 12.

We’re Doing It Live
Today’s game will be broadcast on AHLtv, as well as on the radio on Fox Sports 1450AM or on the iHeartRadio app. Coverage begins at 3:45 p.m. MST with Roadrunners Warm-Up, as Jimmy Peebles gets you ready for the game before “Voice of the Roadrunners” Adrian Denny has the call at 4:00 p.m. live from Rockford.