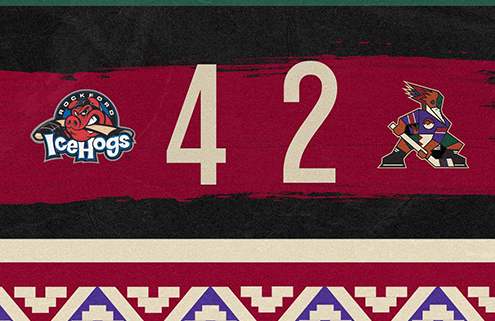 Rockford, Illinois – The Tucson Roadrunners took on the Rockford IceHogs Saturday afternoon at the BMO Harris Bank Center in Rockford, Illinois. The matchup marked the third meeting between the Roadrunners and IceHogs in the last five games, as well at the first of back-to-back contests with the Chicago Blackhawks AHL affiliate this weekend. In the Roadrunners first trip to Rockford since February 2019, the IceHogs took the series opener by a score of 4-2. Both of Tucson’s goals were scored while on the man-advantage by former IceHog Terry Broadhurst and Colin Theisen. Goaltender Ivan Prosvetov was between the pipes for Tucson and stopped 24 shots.

Watch Tucson Roadrunners forward Terry Broadhurst get the Roadrunners on the board in the first period against Rockford. Broadhurst netted his eighth goal of the season on Tucson’s first power-play of the contest, evening the score at 1-1. The former IceHog has seven points (3g 4a) in his last outings, including three points (2g 1a) in as many games against Rockford.

MAKING NOISE ON THE MAN-ADVANTAGE – The Roadrunners tallied back-to-back goals on their first two power-plays of Saturday’s meeting with the Rockford IceHogs. The performance gave the Roadrunners their sixth-straight road game with at least one power-play goal, as well as eight total power-play strikes during that stretch. The man-advantage goals were scored by forwards Terry Broadhurst and Colin Theisen, both their second power-play scores of the season.

Saturday’s matchup with the IceHogs in Rockford marked the first time in franchise history that the Roadrunners wore their alternate Kachina uniforms on the road. Entering the Saturday afternoon contest at the BMO Harris Bank Center, Tucson had a 6-4-0-1 record when wearing the Kachinas this season.

“It was kind of a broken play on the power-play breakout. We had a good net front drive, we took it to the middle and let it rip.”

Tucson forward Colin Theisen on his second period power-play goal of the season, which he scored on Saturday against the Rockford IceHogs. The 24-year-old posted his second multiple-point performance (1g 1a) since joining the Roadrunners on March 23.

After the Roadrunners opened the scoring in each of their last two meetings with the IceHogs, it was Rockford that got on the board first in Saturday’s contest. The goal came with 5:38 gone by in the first period of action and was followed up by a fight between Tucson’s Boko Imama and Rockford’s Garrett Mitchell, Imama’s 11th bout this season. The aftermath of the fight was a five-minute major on Tucson and an extended man-advantage for the IceHogs. A penalty on Rockford during the power-play led to two minutes of four-on-four play, with the Roadrunners killing off the remainder of the penalty after that. Tucson then went on their first power-play of the night later in the period and used it to even the score at 1-1. Terry Broadhurst took a pass from newly signed forward Oliver Chau for his eighth goal of the season and third point (2g 1a) in as many games against his former team. The assist marked Chau’s first professional point in his second game since arriving to Tucson from Quinnipiac University. Also assisting on the score was forward Colin Theisen, who began the middle frame with Tucson’s second power-play goal of the game to take a 2-1 lead. The goal gave Theisen his second multi-point game since joining the Roadrunners on March 23 from Arizona State University. The IceHogs answered back with a goal 8:32 into the second period to tie the contest up at 2-2. Rockford retook the lead with 5:34 still to play in the middle frame at 3-2 with their second goal of the period. The IceHogs held onto the one-goal lead for the next 23:57 before netting an empty-net goal to secure a 4-2 win in the series opener.

The Roadrunners will wrap up both the season series and weekend slate with the IceHogs Sunday afternoon at the BMO Harris Bank Center. Sunday’s series finale is scheduled for 2:00 p.m. MST, with coverage beginning at 1:45 p.m. MST on Fox Sports 1450AM with Roadrunners Warm-Up hosted by Jimmy Peebles. Then, “Voice of the Roadrunners” Adrian Denny will have all the action live from Rockford.