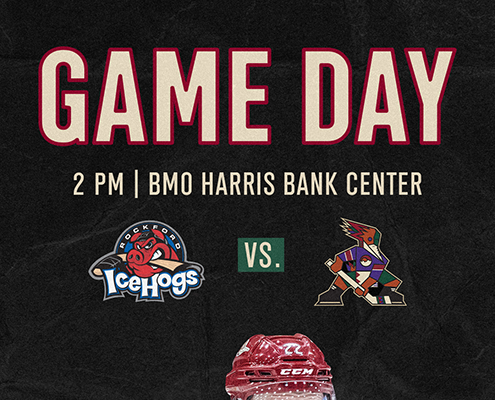 The Roadrunners will wrap up the weekend series with the Rockford IceHogs Sunday afternoon at the BMO Harris Bank Center. The IceHogs took the back-and-forth series opener in Rockford on Saturday by a score of 4-2. Sunday’s series finale marks the fourth and final meeting with the Chicago Blackhawks AHL affiliate in the last nine days to close out the season series, as well as the last out-of-division contest for the Roadrunners this year.

Three Things
1) Saturday’s series opener against the Rockford IceHogs marked the second-straight meeting with the Chicago Blackhawks AHL affiliate that saw the Roadrunners and IceHogs tied after the first period. Tucson and Rockford were knotted at 2-2 after the first 20 minutes of play last Saturday, April 2 in the Old Pueblo, before being deadlocked at 1-1 entering the second period Saturday at the BMO Harris Bank Arena. In all, the Roadrunners and their opponent have been tied after the opening frame in three of their last four contests, with Tucson tallying at least one first period goal in each of their last six games.

2) With the college hockey season coming to an end, the Roadrunners have taken advantage by signing several players for the final month of the regular season. Among them are forwards Colin Theisen and Oliver Chau, who both contributed to the Roadrunners offense in Saturday’s series opener with the IceHogs. The 24-year-old Theisen recorded his second multiple-point performance in eight outings since joining the Roadrunners from Arizona State University on March 23, and now has six points (3g 3a) with a pair of power-play strikes. Meanwhile, Chau tallied the primary assist on Tucson’s first goal Saturday afternoon, marking the 24-year-old’s first professional point in only his second AHL contest.

3) With eight games remaining in the regular season, the Roadrunners currently have the seventh-best power-play percentage in the AHL both on the road (24.3%) and overall (20.9%). Tucson continued their recent stretch of solid special-teams performances while on the road Saturday afternoon in Rockford. The Roadrunners tallied a pair of power-play goals in four trips to the man-advantage, while also going a perfect two-for-two on the penalty-kill. The Roadrunners accomplished this against a Rockford penalty-kill unit that ranks seventh across the AHL at 82.9 percent. Saturday marked the sixth-straight game with a power-play goal on the road for Tucson and second consecutive road matchup with a perfect penalty-kill.

“The easiest way to put it is he’s phenomenal. He’s 6-6 and flexible as can be. He’s made big saves for us all year long and he’s always been there to back us up.”

Roadrunners defenseman Doyle Somerby on Tucson goaltender Ivan Prosvetov. Prosvetov has appeared in 42 games with the Roadrunners this season and ranks fifth in the AHL in both minutes and saves.

Number to Know
66 – The number of penalty minutes racked up between the Roadrunners and IceHogs in Saturday’s series opener at the BMO Harris Bank Center. Saturday’s game saw a fight between Tucson’s Boko Imama and Rockford’s Garrett Mitchell, marking the third-straight meeting with a fight between the Roadrunners and IceHogs. The bout marked Imama’s 11th time dropping the gloves this year, after previously taking on Rockford’s Kurtis Gabriel in the first matchup with the IceHogs this season on April 1.

We’re Doing It Live
Today’s game will be broadcast on AHLtv, as well as on the radio on Fox Sports 1450AM or on the iHeartRadio app. Coverage begins at 1:45 p.m. MST with Roadrunners Warm-Up, as Jimmy Peebles gets you ready for the game before “Voice of the Roadrunners” Adrian Denny has the call at 2:00 p.m. live from Rockford.