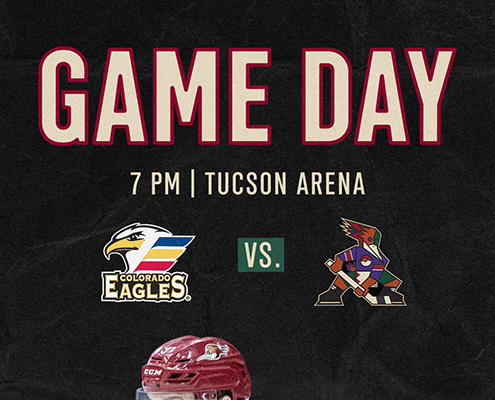 The Roadrunners return to the Tucson for the penultimate home stand of the 2021-2022 regular season, as they’ll host the Colorado Eagles Friday and Saturday night at the Tucson Arena. The Eagles come to the Old Pueblo for the first time since the opening home stand of 2022 on January 8 and 9. Friday’s series opener also marks the beginning of Fan Appreciation Weekend presented by Dave and Buster’s, with pregame and postgame parties taking place at Dillinger Brewing Company. Fans can enjoy $5 Roadrunner Reds at Dillinger, as well as $2 popcorn available for purchase all weekend at the Tucson Arena.

Three Things
1) The Roadrunners are back to facing Pacific Division opponents to close out the season, after six-straight out-of-division matchups dating back to April 1. Tucson will be looking for their third-straight Pacific Division win when they take on Colorado Friday night. Tucson has a 2-0-0-1 record in three series openers with the Eagles so far this season, with both wins being by multiple goals. Tucson enters the weekend having not played since Sunday in Rockford, with a 7-1-1-0 record at home with four days of rest prior.

2) In six games with the Colorado Eagles this season, the Roadrunners have recorded three multiple-goal periods, including two frames with three goals scored. Both three-goal periods came in the opening frame of series openers with the Colorado Avalanche AHL affiliate, and each featured two power-play strikes. Scoring in each three-goal frame against the Eagles this year was current Roadrunners forward Ben McCartney, with both goals coming on the man-advantage. Tucson will look to continue scoring in bunches against the Eagles this weekend, as they have a 10-3-3 when scoring multiple goals in the opening frame and an 11-0-1 record when tallying a three-goal period.

3) Back with the Roadrunners ahead of the weekend series with Colorado is forward Jan Jenik. During the last weekend against the Eagles in Tucson, Jenik netted a goal on the man-advantage to erase a third-period deficit on January 8. The 21-year-old returns to the Roadrunners roster as the active leader for goals (16), assists (23), and power-play goals (8). Jenik enters the weekend with nine points (5g 4g) in his last eight home games with the Roadrunners and has not been held scoreless across a series of two games or more at the Tucson Arena all year.

“It’s good to be back and work with the coaches [in Tucson], I’ve played lots of games here. It’s always nice to get the start almost every night and hopefully make a push here.”

Roadrunners goaltender Ivan Prosvetov on returning to Tucson after back-to-back road trips with the Arizona Coyotes and Roadrunners. Prosvetov started in net for the Coyotes against the St. Louis Blues on April 4, before joining the Roadrunners in Rockford for a start on April 9.

We’re Doing It Live
Tonight’s game will be broadcast on AHLtv, as well as on the radio on Fox Sports 1450AM or on the iHeartRadio app. Coverage begins at 6:45 p.m. MST with Roadrunners Warm-Up, as Jimmy Peebles gets you ready for the game before “Voice of the Roadrunners” Adrian Denny has the call at 7:00 p.m. live from the Tucson Arena