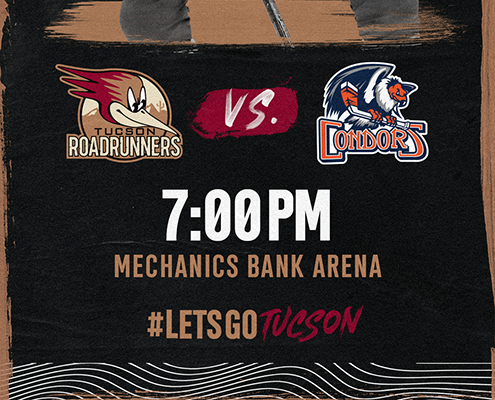 The Roadrunners will take on the Condors for the sixth and final time this season Friday night at the Mechanics Bank Arena in Bakersfield. Tucson’s first trip to Bakersfield since March 5 marks the midway point of their current three-game road stretch before returning home to wrap up the season at the Tucson Arena. After Friday’s contest with Bakersfield, the Roadrunners remaining three games will be against the San Diego Gulls.

Three Things
1) Tucson and Bakersfield have only met once since the end of January, after a three-game set at the Tucson Arena January 26 to 29. Two of the Roadrunners last three meetings with the Condors this year have been decided by one goal, including Tucson’s 3-2 overtime win on January 29. Goaltender Ivan Prosvetov has appeared in each of the last two contests against Bakersfield with a combined 39 saves. After entering the game in their last meeting on March 5, Prosvetov stopped 23-of-23 shots faced for the final 40 minutes.

2) The Roadrunners power-play unit continued to produce Wednesday night against the Stockton Heat, with a goal by Ben McCartney while on the man-advantage in the second period. Tucson has tallied a power-play strike in seven of their last eight road games and in three-straight contests overall. The Roadrunners have recorded five power-play goals in as many meetings with the Condors this year, while also being perfect on the penalty-kill in their last two matchups. With their power-play strike on Wednesday, Tucson’s power-play percentage increased to 23.5 percent on the road and 21.1 percent overall, good for sixth in the American Hockey League and best in Roadrunners team history.

3) Once again providing the offense for Tucson in Wednesday’s matchup with Stockton were key contributors Ben McCartney, Jan Jenik and Victor Soderstrom. McCartney enters Friday night with at least a point in each of his last four road outings (3g 3a), and four goals in his last two games overall. Soderstrom (1g 3a) and Jenik (6a) extended their active point streaks to three games with the assists on McCartney’s power-play goal Wednesday night. Friday also marks the second game back with Tucson for rookie forward Matias Maccelli after a 23-game stint with the Arizona Coyotes. Maccelli was absent from the Roadrunners lineup when they last took on the Condors March 5, but the 21-year-old recorded four points (4a) in Tucson’s four previous meetings with Bakersfield prior to his callup.

“We just have to continue to work hard and good things will happen for sure. Bakersfield has a good team, I think we have to come prepared and come out hard right away.”

Number to Know
9 – The number of fights by Roadrunners forward Tyson Empey after his bout with Stockton’s Tyrell Goulbourne Wednesday night. Empey’s nine times dropping the gloves this season is second on the team, as the Roadrunners have had a fight in six of their last seven road contests. Tucson and Bakersfield have fought four times this season, including when Tyson Empey took on Michael Kesselring on January 28.

We’re Doing It Live
Tonight’s game will be broadcast on AHLtv, as well as on the radio on Fox Sports 1450AM or the iHeartRadio app. Coverage begins at 6:45 p.m. MST with Roadrunners Warm-Up, as Jimmy Peebles gets you ready for the game before “Voice of the Roadrunners” Adrian Denny has the call at 7:00 p.m. live from Bakersfield.