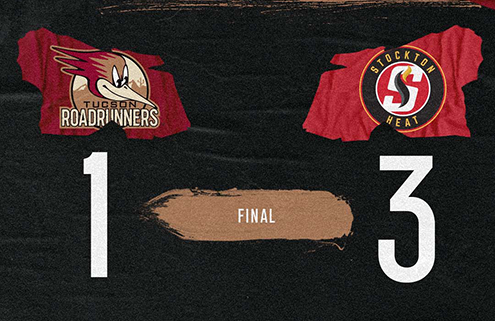 Stockton, California – The Tucson Roadrunners took on the Stockton Heat Wednesday night for the eighth and final time this season. In the Roadrunners first trip to the Stockton Arena since January 15, the Heat defended their home ice with a 3-1 win. Tucson’s goal was scored by Ben McCartney on the power-play for his 18th of the season, while Josef Korenar started in net for the Roadrunners and stopped 25 shots faced.

Watch Tucson Roadrunners forward Ben McCartney get the Roadrunners on the board Wednesday night against the Stockton Heat with his ninth power-play goal of the season. The score marked McCartney’s fourth goal in the last two games after a hat trick on Saturday against the Colorado Eagles. The Roadrunners have now scored their first goal while on the man-advantage in each of their last two contests, both by Ben McCartney.

VICTOR AND JAN PILE IT ON – Tallying assists on Ben McCartney’s power-play goal in the second period Wednesday night were defenseman Victor Soderstrom and forward Jan Jenik. The pair have combined for ten points (1g 9a) in the last three games with Tucson, including two-point performances for both on April 15 against Colorado. Soderstrom and Jenik have appeared in 23 total games with the Arizona Coyotes this season, after the two scored their first career NHL goals in the same game last year on May 8, 2021.

Rookie forward Matias Maccelli returned to the Tucson Roadrunners Wednesday night against the Stockton Heat. The outing marked Maccelli’s first appearance with Tucson since February 27 after being recalled by the Arizona Coyotes. The 21-year-old appeared in 23 games with the Coyotes since March 3 and recorded six points (1g 5a).

“When we have goalies like we do they’re always kicking for us and they’re always battling. It’s good to see and we just have to do what we can and put the puck in the net and they do their job. We’ll play hard in front of them and hopefully see a better result Friday.”

After several close matchups between the Roadrunners and Heat earlier in the season, their final meeting of the year was deadlocked for the opening 15:37. Stockton opened the scoring late in the first period with an even-strength goal before scoring again on their first power-play of the contest to grab a 2-0 lead. Their second goal was scored in the final 36 seconds of the opening frame, as they entered the second leading by a pair. The Roadrunners answered back in the second period with a power-play goal on their third trip to the man-advantage. Ben McCartney buried a rebound from Victor Soderstrom for his fourth goal in the last two games to get Tucson on the board. The goal marked McCartney’s 18th time lighting the lamp this year and ninth time while on the man-advantage. Soderstrom’s assist gave the defensemen five points (2g 3a) in as many outings against the Heat this season, with the secondary assist going to forward Jan Jenik. The rest of the second period saw the Roadrunners face four-straight Heat power-plays, but backstop Josef Korenar and the Tucson penalty-kill unit were able to limit the damage to one goal. Justin Kirkland netted his second power-play goal of the night to push Stockton’s lead back to two with 5:03 still to play in the middle frame. With the Heat still leading 3-1, a fight broke out between Tucson’s Tyson Empey and Stockton’s Tyrell Goulbourne with 8:55 remaining in regulation. The bout marked Empey’s ninth time dropping the gloves this season, second-most on the Roadrunners. Tucson pulled Josef Korenar for an extra attacker late in the third, but a penalty on the Roadrunners forced him back in net as the Heat secured a 3-1 victory on their home ice.

Tucson’s final road trip of the season continues in Bakersfield on Friday as the Roadrunners will face the Condors for the final time this season. Friday’s matchup at the Mechanics Bank Arena is scheduled for 7:00 p.m. MST, with coverage beginning at 6:45 p.m. MST on Fox Sports 1450AM with Roadrunners Warm-Up hosted by Jimmy Peebles. Then, “Voice of the Roadrunners” Adrian Denny will have all the action live from Bakersfield.