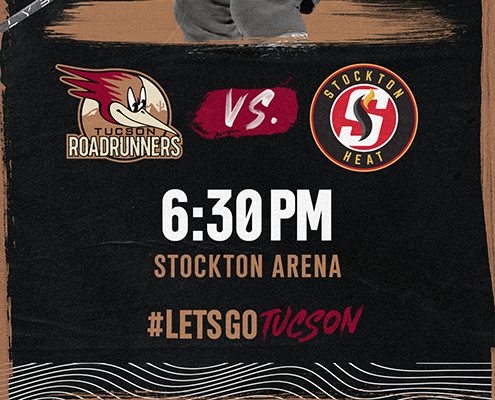 The Roadrunners will open their final road trip of the season Wednesday night against the Stockton Heat. Wednesday’s matchup is the eighth and final meeting with the Calgary Flames AHL affiliate on the season, with Tucson looking to come away with their fourth win against the AHL Pacific Division’s top team. Their three prior victories over Stockton are currently tied for second-most against the team with the highest points percentage in the American Hockey League.

Three Things
1) Tucson will be going for their third consecutive win on the road against Pacific Division opponents Wednesday night when they take on the Stockton Heat. The Roadrunners went 2-1 on their most recent three-game trip within the Pacific Division, with back-to-back wins against the Henderson Silver Knights, the only team with more wins (five) against the Heat than Tucson has. During their last four contests with Pacific Division opponents, the Roadrunners have averaged 4.5 goals per-game with six total power-play goals.

2) The Roadrunners enter the three-game road trip off of a high-scoring weekend at the Tucson Arena. The Roadrunners hosted the Colorado Eagles for a pair of matchups as part of Fan Appreciation Weekend. Tucson and Colorado split their final two meetings of the season with 18 total goals scored between them. The Roadrunners took the series opener by a score of 4-3, as 2021 Arizona Coyotes Draft Pick and 19-year-old Rasmus Korhonen earned his first win in North America. Saturday’s contest was the second time in three games the Roadrunners have battled back from down 4-0 with at least three-straight goals and was highlighted by forward Ben McCartney’s second hat trick of the season. Forward Jan Jenik led the Roadrunners in scoring over the weekend series with five assists.

3) Back with the Roadrunners ahead of Wednesday’s matchup against Stockton is rookie forward Matias Maccelli. The move marks Maccelli’s first return to Tucson since his National Hockey League debut on March 3. The 21-year-old rejoins the Roadrunners as the team’s scoring leader with 55 points (14g 41a) in 42 games played, with his 41 assists ranking eighth across the AHL. Despite not playing in the American Hockey League since February, Maccelli still ranks fourth for total rookie scoring and is fifth in the AHL for points per-game (minimum 15 games played) at 1.31. In 23 games with the Arizona Coyotes, Maccelli tallied six points (1g 5a) and played alongside Tucson teammates Mike Carcone, Hudson Fasching and Jan Jenik.

“It means a lot of things, these games are meaningful in a lot of ways for everybody. We’re playing hockey, it’s fun. I think for everybody it’s setting a tone of what they want to bring next year, what kind of player they’re trying to be, it’s whatever you make of it.”

Roadrunners defenseman Cam Crotty on what the team is playing for with five games left in the regular season.

Number to Know
3 – The number of consecutive meetings between the Roadrunners and Heat that were decided by one goal to start the 2021-2022 season series. Tucson and Stockton haven’t met in over three months, but those early meetings to start the year created a season-long rivalry between the two teams.  Included in those first three meetings were two matchups that went past regulation, with the Roadrunners winning both games. In all, four of the first five contests between Tucson and Stockton this season were decided by one goal, with the Roadrunners edging out the Heat three wins to two.

We’re Doing It Live
Tonight’s game will be broadcast on AHLtv, as well as on the radio on Fox Sports 1450AM or the iHeartRadio app. Coverage begins at 6:15 p.m. MST with Roadrunners Warm-Up, as Jimmy Peebles gets you ready for the game before “Voice of the Roadrunners” Adrian Denny has the call at 6:30 p.m. live from the Stockton Arena.