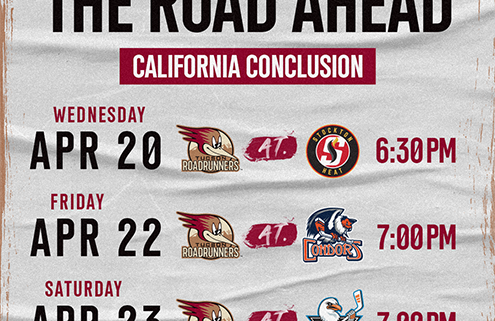 The Roadrunners will embark on their final road trip of the 2021-2022 season, a stretch of three games with three teams across four days in California. The trip begins Wednesday, April 20 in Stockton, before back-to-back nights in Bakersfield and San Diego Friday and Saturday. The contests against the Stockton Heat and Bakersfield Condors mark the final meetings of the season, as the Roadrunners final three games are all against the San Diego Gulls. Four of the previous seven meetings with the Heat this year have been decided by one goal, while two of the last three matchups with Bakersfield have also been one-goal games.

The Coyotes have assigned forward Matias Maccelli to the Roadrunners where he has played 23 games with Arizona tallying one goal and five assists. He was recalled from the Roadrunners on February 28 where he led and still leads the team in most scoring categories with 14 goals and 41 assists for 55 points in 42 games.

The Roadrunners faithful filled the Tucson Arena Friday and Saturday night as the team took on the Colorado Eagles as part of Fan Appreciation Weekend. A total of 9,681 fans were in attendance across the pair of games, the largest combined weekend crowd of the 2021-2022 season. Fan Appreciation festivities included pregame and postgame parties at Dillinger Brewing Company on Friday, along with a pregame Hockey and Hops event on Saturday. Fans were treated to $2 popcorn all weekend long and the first 2,500 fans to arrive to Saturday’s game received a Roadrunners team poster.

Back For Two More

McCartney Fires Up The Fans

Forward Ben McCartney capped off Fan Appreciation Weekend at the Tucson Arena with the second hat trick of his first full season in the AHL. McCartney found the back of the net in all three periods Saturday night for his 15th, 16th, and 17th goals of the year to lead the active roster. The 20-year-old joined Mike Carcone as the only Roadrunners with two hat tricks this season, after he recorded his first in Tucson’s home opener on October 23, 2021.

Tucson goaltender Rasmus Korhonen earned his first American Hockey League victory Friday night against the Colorado Eagles in his first game in front of a home crowd. The 19-year-old stopped 37 shots in the 4-3 win, tied for the third-most by a Roadrunners netminder this year. Korhonen was drafted by the Arizona Coyotes in the fourth round (#122 Overall) of the 2021 NHL Draft and made history as the youngest-ever Roadrunner at the time of his debut.

Over the weekend series with the Colorado Eagles, Roadrunners forward Jan Jenik tallied five total assists for his most points over a two-game stretch this year. Jenik has not been held scoreless across a home series of two games or more all season and has tallied nine points (1g 8a) over his last six outings. The 21-year-old is the active team leader for assists (28), power-play goals (8) and total points (44). Jenik returned to the Roadrunners roster ahead of Friday’s series opener against Colorado after seven games with the Arizona Coyotes, which featured a two-goal performance against the San Jose Sharks on March 30.

A Power-Play To Remember

The Roadrunners racked up three power-play goals across the pair of games with the Colorado Eagles last weekend at the Tucson Arena. In all, the Roadrunners totaled 10 goals while on the man-advantage in eight meetings with the Colorado Avalanche AHL affiliate this season for the second-most against a single opponent, only behind 12 PPG in eight games against the Ontario Reign. With five games remaining in the season, Tucson’s power-play ranks sixth in the AHL and the best in franchise history at 21.2 percent.

Roadrunners forward Cedric Lacroix dropped the gloves twice during the weekend series with the Colorado Eagles at the Tucson Arena, both times against Colorado’s Dalton Smith. Those bouts were the seventh and eighth times the Roadrunners and Eagles dropped the gloves this season in eight meetings, the second-most with any opponent this season for Tucson. Leading the way this season were the nine fights in just six matchups with the San Jose Barracuda, including five on March 16 at the Tucson Arena, the most in a single game this year.