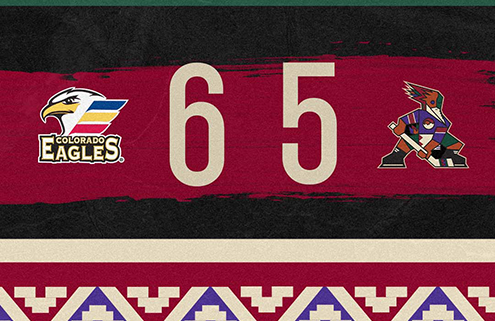 Tucson, Arizona – The Tucson Roadrunners wrapped up both the weekend series and the season series with the Colorado Eagles Saturday night at the Tucson Arena. After falling behind 4-0 in the first 7:39 of the contest, the Roadrunners battled back to even the score at 4-4 and 5-5 before falling to the Eagles 6-5 in regulation. Tucson forward Ben McCartney tallied his second hat trick of the season with a goal in each period of play. Ivan Prosvetov started in net for the Roadrunners before being relieved by Josef Korenar, as the pair combined for 26 saves. Saturday also represented the final game of Fan Appreciation Weekend presented by Dave and Buster’s, as a crowd of 5,196 came out to show their support.

Watch Tucson Roadrunners forward Ben McCartney complete his second hat trick of the season Saturday night against the Colorado Eagles. McCartney scored in all three periods of play Saturday night to improve to 17 goals on the season, leading the active Tucson roster. The 20-year-old has five goals in his last five home outings dating back to April 2.

THREE WITH THREE – The Roadrunners had three players record three points in Saturday’s series finale with the Colorado Eagles: forwards Ben McCartney (3g), Terry Broadhurst (3a) and Jan Jenik (3a). The performance marked McCartney’s third three-point outing of the season, Broadhurst’s second, and Jenik’s third. Jenik tallied five points —all assists— over the weekend series with the Eagles.

Prior to Saturday’s series finale with the Colorado Eagles, the Tucson Roadrunners hosted the second Hockey and Hops event of the season. Over a dozen local Tucson breweries were in attendance, as fans that attended the sampling event also received a Roadrunners commemorative tasting glass.

“The biggest thing was the resiliency. With our backs against the wall, we had a no-quit attitude and we were playing for each other. It was awesome to see. Tonight was definitely a fun hockey game, a bit of a rollercoaster of emotions. But being down by a few early and battling back was huge. Credit to the guys for playing with their hearts all the way through.”

Tucson forward Terry Broadhurst on the strong effort from Tucson facing an early deficit in Saturday night’s contest against the Colorado Eagles.

After Tucson scored in the first minute of the series opener Friday night, the Eagles answered back with a goal 50 seconds into Saturday’s contest. The goal came on Colorado’s first power-play of the night and gave the Eagles their first lead of the weekend. Colorado extended their early advantage to 2-0 with an even-strength goal scored 4:44 into the opening frame. The Eagles didn’t stop there as they added another goal just after their second power-play of the evening expired to jump out to a 3-0 lead in the first 6:36 of play. The advantage reached 4-0 for Colorado with their second power-play goal of the night 1:03 later. Tucson got on the board just before the midway point of the first period with a five-on-three power-play goal, as Ben McCartney buried a rebound on the man-advantage for his 15th goal of the season to cut Colorado’s lead to 4-1. Despite five combined goals in the first 9:53 of the opening frame, the latter half of the period was scoreless as the Roadrunners still trailed 4-1 entering the middle 20 minutes of play. The second period action began with a fight between Tucson’s Cedric Lacroix and Colorado’s Dalton Smith for the second-straight night. The bout marked Lacroix’s fifth time dropping the gloves this year, and eighth fight in as many meetings between the Roadrunners and Eagles on the season. Tucson pulled to within two goals with a shorthanded score by Captain Hudson Fasching, his 13th of the year. The goal came with 6:20 still to play in the middle frame and ended a scoring drought of 23:47 for the game. The Roadrunners cut the deficit to one just 45 seconds later as Ben McCartney buried the puck for his second goal of the game and 16th of the season. With just 2:02 still to play in the middle period, Tucson made it a tie game. After trailing 4-0 7:39 into the contest, defenseman Andrew Nielsen capped off a stretch of four consecutive goals for the Roadrunners to even the score at 4-4 entering the third period of play. The score marked Nielsen’s first time lighting the lamp this season and was the third Roadrunners goal in a span of 4:18 during the middle frame. With the score tied for the first time since the opening minute of action, the Eagles retook the lead at 5-4 with 5:37 gone by in the third period. Tucson continued to battle back late in the third as Ben McCartney completed the hat trick and evened the score at 5-5 with just 3:06 still to play. The Eagles held on, however, scoring a goal in the final five seconds to take the series finale by a score of 6-5.

The Roadrunners will head out to California for the final road trip of the season beginning Wednesday night against the Stockton Heat. The eighth and final meeting between the Roadrunners and Heat is scheduled for 6:30 p.m. MST, with coverage beginning at 6:15 p.m. MST on Fox Sports 1450AM with Roadrunners Warm-Up hosted by Jimmy Peebles. Then, “Voice of the Roadrunners” Adrian Denny will have all the action live from the Stockton Arena.