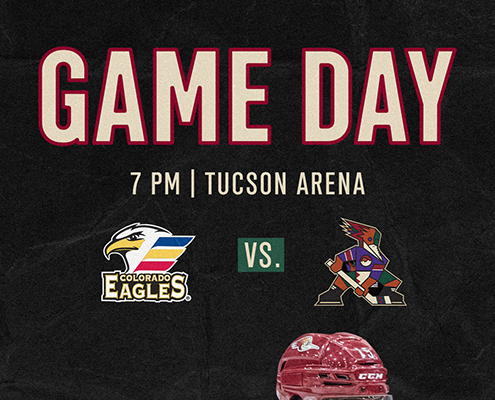 The Roadrunners wrap up Fan Appreciation Weekend Saturday night at the Tucson Arena, as they’ll once again host the Colorado Eagles for the final meeting of the season between Tucson and Colorado. The Roadrunners will be looking for back-to-back wins over the Colorado Avalanche AHL affiliate, and fourth consecutive win against Pacific Division opponents. As part of Fan Appreciation Weekend, the Roadrunners will be hosting a Hockey and Hops event starting at 4 p.m., with tickets available HERE. In addition, the first 2,500 fans to arrive to Saturday’s game will receive a Roadrunners team poster.

Three Things
1) The Roadrunners took the series opener with the Eagles Friday night at the Tucson Arena by a score of 4-3. The Roadrunners scored in the first minute before leading for 57:27 of the next 59:04 to secure their third-straight win against a Pacific Division opponent. Tucson tallied a pair of goal while on the man-advantage Friday night for a total of nine power-play goals in seven meetings with the Eagles this season. Victor Soderstrom recorded two points (1g 1a) while on the man-advantage Friday night to enter a tie for most power-play points (11) by a Roadrunners defenseman this season.

2) Defenseman Cam Crotty’s goal 56 seconds into Friday’s matchup with the Colorado Eagles marked the fourth time this season where the Roadrunners scored in the opening minute of a contest. Tucson is 2-0-2 when scoring in the first minute of a contest, with the last instance being a 4-3 shootout win over the San Jose Barracuda. Tucson has lit the lamp in the first five minutes of a game 12 times this season, including eight times since the start of March.

3) Two of Tucson’s four goals in Friday’s series opener were scored by players that have appeared in all 62 games so far: forward Cameron Hebig and defenseman Cam Crotty. Both Hebig and Crotty tallied a goal in the series opener with the Eagles Friday night. Crotty’s goal was a blast from the point in the first minute of play to put the Roadrunners up 1-0, his fourth goal of the season. Hebig scored the only goal of the second period to extend Tucson’s lead to 3-1 with his 12th time lighting the lamp this season, a new career high.

“I wasn’t nervous, I was just enjoying it. It’s always fun to play… The game is faster [in North America] but each game gets better.”

Number to Know
37 – The number of saves made by Tucson netminder Rasmus Korhonen in Friday night’s series opener with the Colorado Eagles. The 4-3 win represented Korhonen’s first American Hockey League victory, as his 37 saves were tied for third-most by a Roadrunners goaltender this season. Three of Tucson’s top four save totals this season have come against the Eagles.

We’re Doing It Live
Tonight’s game will be broadcast live in Southern Arizona on the CW Tucson, as well as on AHLtv. The game will also be on the radio on Fox Sports 1450AM or the iHeartRadio app. Coverage begins at 6:45 p.m. MST with Roadrunners Warm-Up, as Jimmy Peebles gets you ready for the game before “Voice of the Roadrunners” Adrian Denny has the call at 7:00 p.m. live from the Tucson Arena.