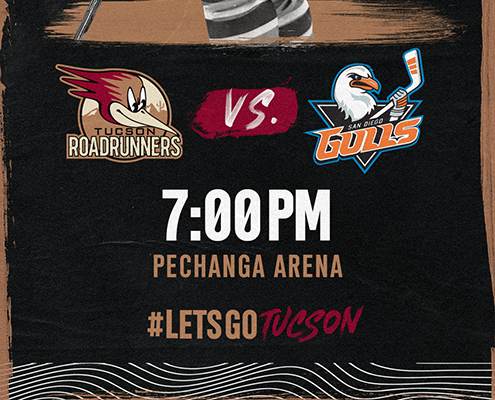 The Roadrunners will round out their final road trip of the season Saturday night as they’ll take on the San Diego Gulls at the Pechanga Arena. Each of Tucson’s final three games of the 2021-2022 season will be against their I-8 Border Rivals beginning with Saturday night in San Diego, followed by a pair of contests at the Tucson Arena Thursday, April 28 and Friday, April 29. Tickets for the final two Roadrunners games of the season can be found HERE.

Three Things
1) The Roadrunners and Gulls have produced high-scoring matchups over their five previous meetings this season, averaging a combined eight goals per-game. Tucson has recorded a pair of hat tricks against San Diego this season, achieved by forwards Hudson Fasching (October 30) and Mike Carcone (February 5). The Roadrunners fell to the Gulls by a score of 4-3 in their last matchup on March 23, as they were without top scorers Jan Jenik and Matias Maccelli. Both back in the Tucson lineup for Saturday night, Jenik (1g 4a) and Maccelli (1g 5a) have each put up respectable numbers in four outings against the Anaheim Ducks AHL affiliate this season.

2) The Roadrunners have made a focus of staying out of the penalty box over the latter portion of their current California road trip. In Friday’s game with the Bakersfield Condors, Tucson played at even-strength or better for the final 50:33 of regulation with four trips of their own to the man-advantage. The Roadrunners finished the night a perfect one-for-one on the penalty-kill, while also tallying a power-play goal with 46 seconds remaining in regulation. Tucson has scored on the man-advantage in four-straight contests, as well as in eight of their last nine road matchups. Their power-play percentage has continued to climb in the final month of the season, as it currently ranks sixth in the AHL at 21.2 percent after Friday’s goal.

3) While the Roadrunners were on the road in Bakersfield Friday night, forward Boko Imama was making his mark with the Arizona Coyotes in Glendale. The 25-year-old made his National Hockey League debut with the Coyotes after being recalled Friday morning, as he took the ice against the Washington Capitals at Gila River Arena. Imama played alongside 2021-2022 Tucson teammates Mike Carcone, Barrett Hayton, JJ Moser, Cam Dineen, and Vlad Kolyachonok. Friday’s outing was his first taste of NHL action after 207 games at the AHL level with the Roadrunners and Ontario Reign. In his first season with Tucson, Imama set franchise records for fights (11) and total penalty minutes (178), while also tallying 12 points (5g 7a) in 54 games played.

“I feel like every game I get a little more comfortable. I’m just trying to limit those rookie mistakes and obviously playing with the guys here helps out a ton.”

Roadrunners forward Oliver Chau on gaining experience at the AHL level. The 24-year-old has appeared in seven games with Tucson since joining the team out of Quinnipiac University on April 6. His first pro point came in only his second game on April 9 and started a two-game scoring streak.

Number to Know
4 – The number of consecutive seasons where the Roadrunners have laid claim to the I-8 Border Cup Trophy over the San Diego Gulls. With three games remaining against the Gulls, a pair of regulation wins for Tucson would secure the Trophy for a fifth-straight year. All five previous matchups on the season have been decided in regulation, with San Diego currently having an advantage of three wins to two.

We’re Doing It Live
Tonight’s game will be broadcast on AHLtv, as well as on the radio on Fox Sports 1450AM or the iHeartRadio app. Coverage begins at 6:45 p.m. MST with Roadrunners Warm-Up, as Jimmy Peebles gets you ready for the game before “Voice of the Roadrunners” Adrian Denny has the call at 7:00 p.m. live from the Pechanga Arena.