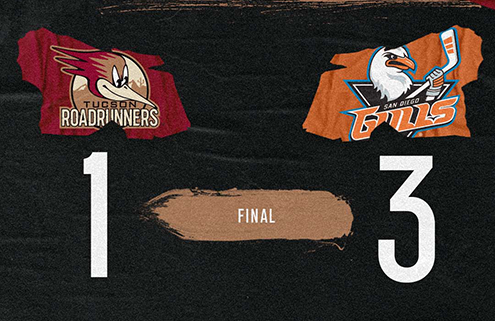 San Diego, California – The Tucson Roadrunners concluded their final road trip of the season Saturday night as they took on their I-8 Border Rivals, the San Diego Gulls. After scoring the only goal through the first 55 minutes of play, the Roadrunners fell behind to San Diego late before the Gulls came away with a 3-1 victory. Colin Theisen recorded his fourth goal for Tucson in his 14th game since joining the roster from Arizona State University. The goal was possible because of a hustle play by forward Oliver Chau for his third assist in eight games since coming to the Roadrunners from Quinnipiac University. Rasmus Korhonen made his third start in net for Tucson since his AHL debut on April 10 and stopped 18 of 20 shots faced. Saturday night marked the first of three-straight meetings between the Roadrunners and Gulls to end the season, as they’ll face off Thursday and Friday at the Tucson Arena.

Watch Tucson Roadrunners forwards Colin Theisen and Oliver Chau combine for the only goal of the first 40 minutes of Saturday night’s contest with the San Diego Gulls. Chau poked the puck away from a San Diego skater before feeding it to Theisen at the other end to put Tucson up 1-0. The pair of college hockey standouts have combined for 11 points (4g 7a) in 22 games with the Roadrunners after the conclusion of their respective college seasons.

MEANWHILE IN GLENDALE – While Tucson wrapped up their three-game road trip in California Saturday night, the Arizona Coyotes concluded a four-game stint at Gila River Arena with the help of some former Roadrunners. Trailing 4-1 late in the contest, the Coyotes rallied back with three-straight goals by 2021-2022 Tucson skaters to force overtime and earn a standings point against the St. Louis Blues. Boko Imama buried his first career NHL goal in only his second game with the Coyotes to cut the deficit to 4-2. The next was scored by Tucson’s leading goal-scorer over the last two seasons, Mike Carcone for his first career multi-point night (1g 1a). Finally, defenseman JJ Moser netted the equalizer for Arizona with an assist from Jan Jenik, who was recalled from the Roadrunners earlier in the day.

Roadrunners forward Travis Barron battles for the puck in Saturday’s matchup with San Diego. Barron has appeared in all six meetings on the season against the San Diego Gulls in the I-8 Border Rivalry.

“I thought we did well off the rush, all four lines were humming when we were five-on-five. It’s nice that our discipline was a lot better tonight. [Oliver Chau] made a great play, blocked a shot and went down, and I just tried to find an open area.”

Tucson forward Colin Theisen on his goal Saturday night in San Diego, as well as the overall play of the Roadrunners while at even strength.

For the first time in 32 games, the Roadrunners and their opponent were held scoreless for the first 20 minutes of play. The last time the Roadrunners and their opponent entered the second period tied at zero was January 29 against the Bakersfield Condors, an eventual 3-2 overtime win for Tucson. Despite the scoreless first period, the Roadrunners controlled the momentum for the back half of the period with several quality chances on Gulls backstop Lukas Dostal while outshooting San Diego nine to five. The five shots by the Gulls were tied for the second-fewest allowed by Tucson in an opening period this year. The Roadrunners continued to apply pressure in the second period looking to create and score on another odd-man rush. That’s exactly what happened as Tucson opened the scoring with 4:02 gone by in the middle frame. Forward Oliver Chau forced the puck away from the Gulls on one end before feeding it to Colin Theisen at the other end for Theisen’s fourth goal of the season. The sequence earned Chau his third assist of the season and gave the Roadrunners a 1-0 lead. The goal marked the only score of the first two periods of play, as Tucson fended off a pair of Gulls power-plays to lead 1-0 entering the final 20 minutes of regulation. The Roadrunners continued to keep the Gulls off the board for the opening 15 minutes of the third period, before San Diego scored three-straight goals in the final 4:56 of regulation, as Roadrunners Head Coach Jay Varady stood in front of the Tucson bench furious in disbelief that a penalty wasn’t called on the change of possession leading to the second goal. The first two goals were scored within 1:19 of each other at even-strength before San Diego added an empty-net score to secure the 3-1 victory on their home ice.

The Roadrunners will return home for the final two games of the 2021-2022 regular season, both against the San Diego Gulls. Thursday’s opener at the Tucson Arena is scheduled for 6:30 p.m. MST, with coverage beginning at 6:15 p.m. MST on Fox Sports 1450AM with Roadrunners Warm-Up hosted by Jimmy Peebles. Then, “Voice of the Roadrunners” Adrian Denny will have all the action live from the Old Pueblo.