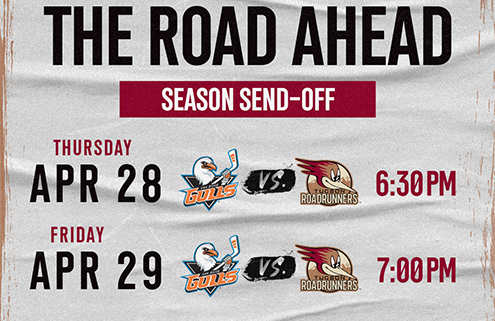 The Roadrunners will return home to the Tucson Arena for the final two games of the 2021-2022 regular season, both against the San Diego Gulls. The games represent the seventh and eight matchups with their I-8 Border Rivals on the season after meeting with the Gulls at the Pechanga Arena on Saturday, April 23. In that game, forward Colin Theisen notched his fourth goal in 14 games with Tucson, while 19-year-old netminder Rasmus Korhonen took a shutout into the final five minutes of regulation in only his third AHL start. The Roadrunners can secure the I-8 Border Cup Trophy for a fifth-straight year by winning both contests over the Gulls in regulation.

Thursday and Friday’s games at the Tucson Arena will be a Fan Appreciation Encore series as the Roadrunners close out the 2021-2022 season on their home ice. Fans can purchase a special Season Send-Off Pack which includes the popular Roadrunners Pride T-Shirt and a game ticket for $25. In addition, fans who bring a stuffed toy at either game to donate to Banner Health’s Diamond Children’s Medical Center will receive a raffle ticket for a team-signed jersey. For information and to purchase tickets, click HERE.

Previously At The Tucson Arena

Tucson will be hosting the San Diego Gulls this week for the first time since October 29 and 30, 2021. The Roadrunners and Gulls split the previous two-game set at the Tucson Arena with a combined 16 goals over the pair of games. Tucson won the series finale on Saturday, October 30 fueled by a five-point night and hat trick from Captain Hudson Fasching. His third goal to complete the hat trick came with 1:32 still to play in the second period and was the eventual game-winner.

Any Given Night For Goalies

The Roadrunners started a different goaltender in all three of their road matchups last week. Josef Korenar began the trip with a 25-save performance against the division-leading Stockton Heat. Ivan Prosvetov suited up for the next game with a 25-save outing of his own against the Bakersfield Condors. Finally, 19-year-old Rasmus Korhonen was between the pipes the following night against the San Diego Gulls and took a shutout to the final 4:56 of regulation.

Arizona Coyotes prospect Victor Soderstrom has continued to shine over the final month of the season with the Tucson Roadrunners and was recalled to the Coyotes Tuesday morning. Soderstrom tallied a point in each of the first two games of last week’s three-game road trip for Tucson to extend his point streak to four games, his longest of the season. The 21-year-old leaves Tucson with five points (1g 4a) in as many games and totaled 16 assists and 19 points.

Return Of The Mac

Back with the Roadrunners for the first time since February 27 last week was rookie forward Matias Maccelli. Maccelli appeared in all three games on Tucson’s road trip in California and will make his return to the Tucson Arena on Thursday against the San Diego Gulls, where he has recorded 26 points (10g 16a) in 21 outings. The 21-year-old remains the team leader in assists (41) and points (55) and brings back with him 23 games of NHL experience with the Arizona Coyotes. Maccelli is one of eight 2021-2022 Roadrunners to make their National Hockey League debut with the Coyotes this season and has the fifth-most outings among them.

With two games still to play and a pair of goals on the man-advantage last week during Tucson’s three-game road trip, the Roadrunners power-play is set to finish as the best in team history. The unit currently ranks sixth in the American Hockey League at 21 percent, with their 57 total power-play goals currently tied for the most in Roadrunners franchise history (2017-2018).

While the Roadrunners were in California on a three-game trip last week, the Arizona Coyotes wrapped up a four-game home stand with the help of 2021-2022 Tucson standouts. Friday’s matchup with the Washington Capitals marked the National Hockey League debut of forward Boko Imama. Imama has appeared in 54 games in his first season with the Roadrunners, setting franchise records for fights (11) and penalty minutes (178). On Saturday against the St. Louis Blues, Imama sparked a three-goal comeback in the third period with his first NHL goal. The next goal came from Mike Carcone for his first multi-point outing (1g 1a) in the NHL. Finally, rookie defenseman JJ Moser evened the score at 4-4 to force overtime with the Blues. Assisting on Moser’s goal was forward Jan Jenik for his first National Hockey League assist.

Roadrunners forward Ben McCartney has the chance to reach a pair of milestones during the final two games of the season against the San Diego Gulls. McCartney’s next point will be his 35th of the season and the 20-year-old is two goals away from 20 on the season. In his first full season with Tucson, McCartney has appeared in the sixth-most games (55) and has the second most goals (18) behind only Mike Carcone.