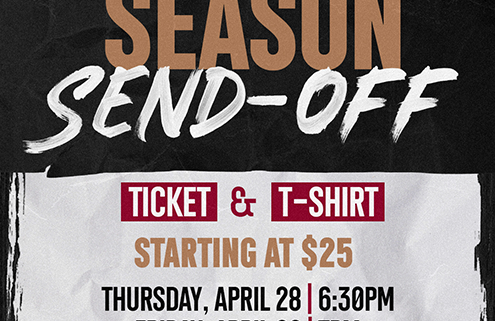 Tucson, Arizona – The Tucson Roadrunners, owned and operated by the Arizona Coyotes, wrap up their home schedule Thursday at 6:30 p.m. and Friday at 7 p.m. with a pair of games against their I-8 Border Rivals the San Diego Gulls.

By winning both games in regulation, the Roadrunners will win the I-8 Border Trophy for a fifth consecutive season.

Fans are invited to bring stuffed toys to both games to benefit Banner Health’s Diamond Children’s Medical Center. Fans will receive a raffle ticket for each toy donated and one ticket will be drawn for a team signed jersey.

The team has also received a new shipment of the popular Roadrunners Hockey Is For Everyone T-Shirts and will include a ticket to Thursday or Friday’s game for $25 at TucsonRoadrunners.com/Pack.

Fans can also take advantage of a $20 ticket to either game this week that will include a $5 donation to Roadrunners Give Back, a branch of the Arizona Coyotes Foundation at TucsonRoadrunners.com/RGB.

Before and after Friday’s game, Dillinger Brewing Company will also be offering $5 Roadrunner Reds at their 4th Avenue location located at 402 East Ninth Street.