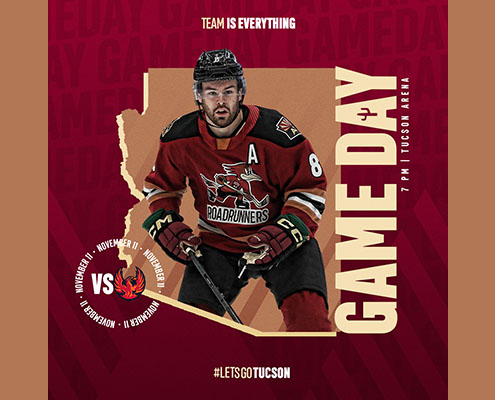 The 6-2-0-0 Tucson Roadrunners return home to kick off a six-game home stand Friday night at the Tucson Arena, as they’ll play host to the new Coachella Valley Firebirds for the first time. The AHL affiliate of the Seattle Kraken currently sit at 5-3-0-0 and take their first trip to the desert after starting the season with four matchups apiece against Calgary and Abbotsford. Tucson will look to remain one of two teams in the American Hockey League yet to lose at home this season (Rochester), as they enter the weekend with a 2-0-0-0 record at the Tucson Arena.

Three Things
1) Friday marks the first home game for Tucson since Opening Weekend on October 22 and 23 against the Bakersfield Condors. The Roadrunners won both games of the weekend series with Bakersfield, scoring multiple goals in three of the six periods. This included a four-goal second period in the series opener, with three of the four goals being scored on the power-play. The Roadrunners lead the American Hockey League in goals per-game at home this season with five in each of their wins over the Condors on home ice.  They are also atop the AHL in home power-play percentage at 40.0%, with four goals in ten attempts all scored by a different player. Tucson has seen seven different players score their ten total goals at the Tucson Arena, while 14 total Roadrunners have lit the lamp through eight games this season.

2) Tucson is currently tied for the third-best goal differential in the AHL’s Western Conference at plus-seven, trailing only the Ontario Reign and Manitoba Moose. Tucson remains tied for ninth in the AHL in goals scored per-game, while all three of their opponents on the upcoming home stand are in the bottom half for goals allowed per-game (Coachella Valley, Henderson, San Jose). The Roadrunners are undefeated this season when netting at least three goals, while Coachella Valley has allowed three goals or more in five of their last six contests. The Firebirds are coming off a weekend split against the Abbotsford Canucks that saw Coachella Valley get narrowly outscored by a count of six to five.

3) A pair of roster moves have been made since the Roadrunners last took the ice on Friday, November 4. Tucson’s leading goal-scorer and AHL Player of the Week Award winner Laurent Dauphin was recalled by the Arizona Coyotes, joining the NHL club on their 14-game road trip. His eight points (5g 3a) are tied for second on the team entering the weekend. In addition, defenseman Conor Timmins has been assigned to the Roadrunners for conditioning purposes from the Arizona Coyotes. The 24-year-old was acquired by the Coyotes from the Colorado Avalanche during the 2021 offseason and was drafted by the Avalanche a year after second-year Roadrunner Travis Barron in 2017. Timmins has faced the Roadrunners six times in his career, all as a member of the Colorado Eagles during the 2019-2020 campaign.

“It’s great to be back. Obviously, the weather is great (in Tucson). We were in Calgary for a bit, and it was nice and cold there. It was a long road trip, but it’s nice to be back for six games.”

Roadrunners forward Nathan Smith on the team returning home to the Tucson Arena for a six-game home stand. Six of the Roadrunners first eight games this season have been away from Southern Arizona, including each of the last four.

Number to Know
1 – The number of qualified goaltenders in the American Hockey League with a save percentage of .950 or better, that goalie being Roadrunners backstop Ivan Prosvetov at .951. Prosvetov is off to one of the best starts of his professional career, with his 4-0-0 individual record matching his best start to a campaign, which he set in 2020-2021. In addition to his league-leading save percentage, the fourth-year Roadrunner is second in the league for goals against average at 1.53, and Prosvetov is one of two AHL netminders with at least four wins and no losses so far this season (Keith Petruzzelli – Toronto).

We’re Doing It Live
Tonight’s game will be broadcast live on AHLtv, as well as on the radio on FOX Sports 1450AM and the iHeartRadio app. Coverage will start at 6:45 p.m. with Roadrunners Warm-Up hosted by Jimmy Peebles, before “Voice of the Roadrunners” Adrian Denny has all the action from the Tucson Arena.