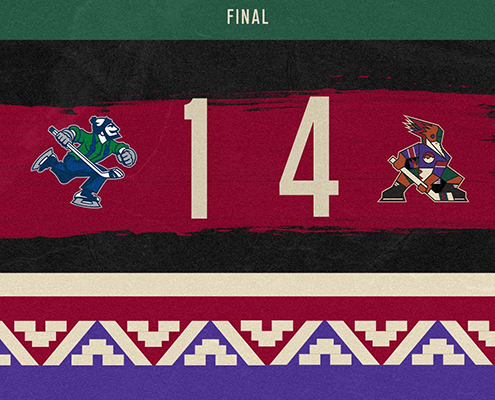 Tucson, Arizona – The Tucson Roadrunners hosted the Abbotsford Canucks for the first time in franchise history Friday night at the Tucson Arena. The Roadrunners scored the final four goals to come away with a 4-1 victory, starting the all-time series with Abbotsford off with a win. Roadrunners goaltender Ivan Prosvetov was stellar in net, as he stopped 29 shots and earned the win.

Abbotsford was the first team to get on the board Friday night, capitalizing on an early opportunity in the Roadrunners zone to jump out to a 1-0 lead just 1:07 into the contest. It was clear Tucson wasn’t interested in playing catch-up for long, as they came close several times on their first power-play of the night, and finally broke through on an uncontested rush by Mike Carcone and Cameron Hebig, with Carcone getting the goal and tying the game up at one. Tucson took their first lead of the night just over two minutes later, when Hudson Elynuik scored his first goal of the season to put Tucson up 2-1. The Roadrunners extended that lead a minute and a half later, when Matias Maccelli scored on a blast from the face-off circle, pushing the Roadrunners lead to two. Those three goals were all scored just 3:34 apart and were an excellent answer to Abbotsford’s early score. The Roadrunners killed off a late penalty for Abbotsford which included goaltender Ivan Prosvetov briefly losing his stick and still making a save to keep Tucson’s lead at 3-1 heading into the second period. Tucson saw some decent chances in the early part of the second period, with the Canucks having trouble clearing the puck from their zone. The Roadrunners were faced with 17 seconds of five-on-three to kill but the team was able to fend off both power-plays and keep their lead at two goals at the midway point of the second period. Despite facing the pair of power-plays, Tucson held the Canucks to six shots on goal during the middle frame and fired off 13 shots of their own onto Abbotsford netminder Michael DiPietro. With just over three minutes to go in the second period, Tucson went on their first power-play since the opening minutes of the first period. Abbotsford kept the Roadrunners from extending their lead any further, and the teams entered the final 20 minutes with Tucson possessing a 3-1 advantage. The Roadrunners were full of energy to open the third period, making plays on both ends of the ice. Mike Carcone buried the puck in close for his second goal of the night, pushing Tucson’s lead to 4-1 less than five minutes into the final frame. The Roadrunners killed off a crucial penalty just past the midway point of the period to keep things out of reach for the Canucks.

The Roadrunners will be back Saturday night to try to win another against Abbotsford, with that game set to face-off at 7:00 p.m. MST. Coverage starts at 6:45 on Fox Sports 1450AM with Roadrunners Warm-Up hosted by Jimmy Peebles. Then, “Voice of the Roadrunners” Adrian Denny will have all the action live from the Tucson Arena.

“We’re getting better every game, every day. We have a young group of guys, and our coaches are doing a great job. We watch a lot of video, we learn from our mistakes. I feel like we’re figuring out our game and we just have to hold onto that.”

Roadrunners goaltender Ivan Prosvetov on the constant improvement from this Roadrunners team as Tucson looks to keep winning after their 4-1 victory Friday night against Abbotsford.

FIRE IN THE GOAL – The Tucson Roadrunners recorded 39 shots on goal in Friday night’s 4-1 victory over the Abbotsford Canucks, setting a new season high. Leading the way was forward Cameron Hebig with six, followed by JJ Moser with five, and Mike Carcone and Ben McCartney each with four.

Watch Tucson Roadrunners forward Hudson Elynuik give the Roadrunners the lead in the first period of Friday night’s matchup with the Abbotsford Canucks. The goal was Elynuik’s first of the season, and the eventual game-winnner as Tucson defeated the Canucks 4-1.

Tucson Roadrunners rookie forward Matias Maccelli celebrates with linemate Cameron Hebig after Maccelli scored his fifth goal of the season, tying him for the team lead. Maccelli leads Tucson in points with 13 points in as many games played, and