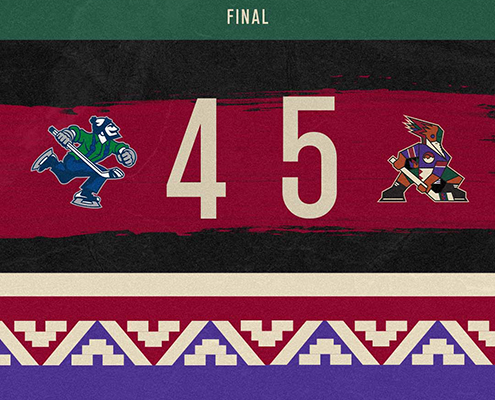 Tucson, Arizona – The Tucson Roadrunners defeated the Abbotsford Canucks in thrilling fashion Saturday night, overcoming a 4-3 deficit with less than six minutes to play in a 5-4 win. Cameron Hebig had the equalizing goal, his second of the night, followed by JJ Moser with the game-winner on the power-play with 50 seconds remaining in regulation. Goaltender Zane McIntyre made his home debut for the Roadrunners and recorded 21 saves improve to 2-0.

Like Friday night’s series opener, Abbotsford jumped out to an early 1-0 lead in the contest. It was once again Will Lockwood for the score but this time it was off a rebound on the Canucks first power-play of the night with just 3:35 gone by in the first period. Tucson came back firing on the other end but drew another penalty, halting their offensive attack. The Roadrunners killed off the tripping minor and were right back on the attack in the Abbotsford zone. Tucson got their first chance on the man-advantage just past the midway point of the opening period and used it to tie the contest up at one. Forward Matias Maccelli scored his team-leading sixth goal of the season to even up the score with 8:49 still to play in the first frame. Tucson grabbed their first lead of the night off of the stick of Boko Imama. Imama carried the puck into the offensive zone, and promptly placed it in the back of the net. Just forty seconds later, Cameron Hebig added to the Roadrunners lead with his third goal of the season, making the score 3-1. Abbotsford pulled to within one with a score during the final minute of the first period, but the Roadrunners still led by a goal heading into the first intermission. The Roadrunners and Canucks traded chances to open the second period, with Tucson coming close on a Ben McCartney rush through the Abbotsford zone. Tucson was sent to the box with just over 13 minutes to play in the middle frame but was able to survive the Abbotsford attack. The Canucks tied the game up at three a few minutes after the power-play and took the lead two minutes later, their first advantage since around the midway mark of the first period. The Canucks held onto that lead for the remainder of the period, and the Roadrunners entered the final 20 minutes down 4-3. Tucson kept up their energy in the third period, laying some solid hits on the Canucks whenever possible. The Roadrunners had a handful of near misses just past the midway point of the third period but couldn’t quite get the bounce they needed. That all changed with 5:40 to go in the period when Matias Maccelli carried the puck in and took a hit, which freed it up for Cameron Hebig to score his second goal of the game, tying the game at four as the end of regulation grew near. Tucson went on a power-play with 2:43 to go in regulation, and that’s all it took for the Roadrunners as JJ Moser netted the game winner with 50 seconds on the clock. Another power-play for the Roadrunners sealed a 5-4 win for Tucson, their third-straight victory.

The Roadrunners improved to 7-6-1 on the season and will look to keep their winning streak alive on the road this weekend against the Colorado Eagles Friday and Saturday in Loveland. Both games are scheduled to start at 7:05 p.m. MST. Coverage begins at 6:45 on Fox Sports 1450AM with Roadrunners Warm-Up hosted by Jimmy Peebles. Then, “Voice of the Roadrunners” Adrian Denny will have all the action live from the Budweiser Events Center.

“It’s great to contribute like that tonight but I have to give a lot of credit to my linemates [Mike] Carcone and [Matias] Maccelli. Playing with them is a great opportunity for myself and I just have to make the most of it. Those guys make plays and I’m just trying to get open and capitalize.”

Roadrunners Forward Cameron Hebig on the recent success of him and his linemates Mike Carcone and Matias Maccelli, after the three combined for 12 points over the weekend with Abbotsford.

Watch Tucson Roadrunners rookie defenseman JJ Moser net the eventual game-winner in Saturday night’s 5-4 comeback win over the Abbotsford Canucks. The goal came with just over 50 seconds still to play in regulation and was his third point of the night after registering two assists earlier in the contest.

Tucson Roadrunners Forward Cameron Hebig celebrates after burying the game-tying goal late in the third period of Saturday’s 5-4 win over the Abbotsford Canucks. The goal was Hebig’s second of the night and fourth of the season.

Tucson Roadrunners Road Ahead: Cruising To Colorado
Scroll to top