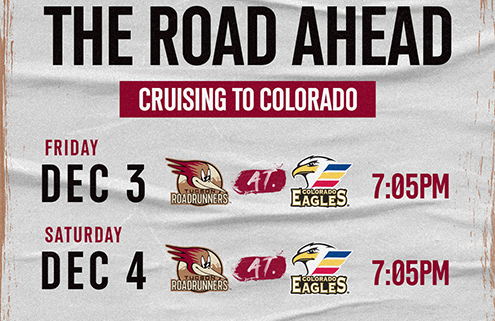 The Roadrunners will travel north to take on the Colorado Eagles for a pair of games at the Budweiser Events Center Friday and Saturday in Loveland. Tucson is looking to extend their active winning streak to four games in the series opener against the Eagles. Colorado enters the series with a 7-7-1-2 record and a three-game point streak, after beginning the season 0-4-0-1.

The Roadrunners will be back at the Tucson Arena Friday, December 10 and Saturday, December 11 to host the Stockton Heat. The weekend will mark the beginning of the Roadrunners last home stand before Christmas and will be filled with fun. Friday’s game has a ticket package that includes a special pregame meet and greet with Spider-Man and will feature the second 3-2-3 night of the season. All fans can purchase $3 hot dogs, $2 soft drinks, and $3 draft beers during Friday’s game, as well as hot chocolate for $3 (or $6 with a shot of Holiday Cheer) all month long. Saturday night marks the Roadrunners Teddy Bear Toss game, one of hockey’s best feel-good traditions. Tickets for both games, as well as the Spider-Man Meet and Greet Package can be purchased HERE.

Comebacks Against The Canucks

Tucson hosted the Abbotsford Canucks for a pair of games in the Old Pueblo last weekend for the first-ever meeting between the Roadrunners and the NHL’s Canucks affiliate. Abbotsford jumped out to an early 1-0 lead in the first period of both games, but Tucson rallied back to win both games 4-1 and 5-4. Each matchup saw the Roadrunners record three consecutive goals in the first period, with all nine goals for Tucson being scored in the first or third periods. The Roadrunners were trailing 4-3 with 5:40 remaining in the third period Saturday night, but forward Cameron Hebig tied up the game with his second score of the night. Then, with 50 seconds to go in regulation, rookie defenseman JJ Moser rifled the puck past the Abbotsford goalie for the eventual game winner, as Tucson extended their winning streak to three games with the sweep of the Canucks.

Leading the way for the Roadrunners this past weekend was Tucson’s top line of Matias Maccelli, Mike Carcone, and Cameron Hebig. The trio accounted for 12 total points over the weekend, including six of the Roadrunners nine total goals. Maccelli recorded multiple-point performances in each of the two games, cementing his place in the team lead for points this season with 17. Carcone and Hebig each had two-goal performances over the weekend, with Carcone accomplishing the feat on Friday, and Hebig following it up on Saturday.

The hottest player in the AHL dating back to November 6 is Roadrunners rookie forward Matias Maccelli. The 21-year-old has 14 points in his last seven games, including a hat trick and five-point night against the Ontario Reign on November 12. The Turku, Finland native was drafted by the Arizona Coyotes in the fourth round (#98 overall) of the 2019 NHL Draft and has appeared in all 14 games for Tucson this season.

Matias Maccelli and fellow rookie JJ Moser have combined to lead the Roadrunners in scoring this season through Tucson’s first 14 games. Maccelli is currently tied for fourth in scoring by all rookies with 17 points, while Moser is third in scoring by rookie defensemen with 11 points, including a three-point night and game-winning goal last Saturday against Abbotsford.

Goalies Get It Done

Over the past three games, Roadrunners goaltenders Ivan Prosvetov and Zane McIntyre have been solid in net, surrendering only six goals on 87 shots and earning all three wins. McIntyre made his Roadrunners debut against the Iowa Wild on November 21 and recorded 31 saves. He followed it up with a 21-save performance and his second victory on Saturday, his first start in front of a Tucson crowd. Prosvetov opened the series with Abbotsford on Friday and stopped 29 of the 30 shots he faced in the win.

After the weekend with Abbotsford at the Tucson Arena, the Roadrunners numbers at home have gotten even better. In eight games in the Old Pueblo this season, the Roadrunners have a 5-3 record with a +3 goal differential. Five different Tucson skaters have recorded multiple-goal games with hat tricks by Ben McCartney, Hudson Fasching, and Matias Maccelli. Tucson’s 33 goals scored at home is most in the AHL Western Conference and the Roadrunners 4.125 goals per-game on home ice leads the Pacific Division.

After the Roadrunners wore their alternate Kachina jerseys last weekend at the Tucson Arena, the team has now donned five of the seven jerseys scheduled to be worn this season. The remaining uniforms are the special 5th Anniversary jerseys, and specialty Cancer Awareness Jerseys. The Roadrunners debuted the 5th Anniversary uniforms last season and will wear them at the end of the month when they host the San Diego Gulls on New Year’s Eve. The Roadrunners will wear their Cancer Awareness jerseys the weekend of February 26 and 27 when they host the Ontario Reign. This will complete the list which includes the home red, away white, El Lazo de Tucson, Kachina, Military Kachina, 5th Anniversary, and Cancer Awareness Jerseys.