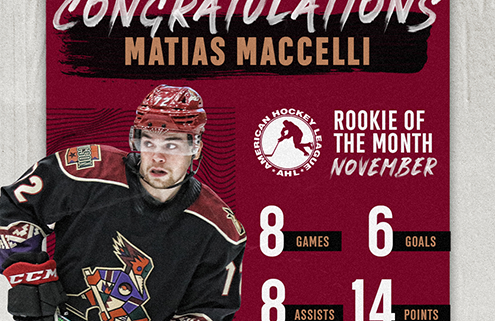 SPRINGFIELD, Mass. … The American Hockey League announced today that Tucson Roadrunners forward Matias Maccelli has been named the league’s Rookie of the Month for November.

Maccelli tallied six goals and eight assists for 14 points in eight games for Tucson during November. He is the hottest player in the AHL since November 6th with 14 points (six goals, eight assists) in his last seven games. He leads Tucson with 17 points in 14 games on six goals and 11 assists. Maccelli leads Tucson in every offensive statistical category including: goals (6), assists (11), points (17), power-play goals (3) and power-play points (5).

After notching an assist at Henderson on Nov. 6, Maccelli scored the first three goals of his AHL career on Nov. 12, part of a five-point night in an 8-4 win over Ontario. He picked up another assist on Nov. 13 against Ontario, and finished the month with goals in three straight games, beginning with the Roadrunners’ 2-1 win at Iowa on Nov. 21. Maccelli tallied a goal and an assist in a 4-1 win over Abbotsford on Nov. 26, and notched a goal and three assists as Tucson rallied for a 5-4 victory over the Canucks on Nov. 27.

A fourth-round choice by Arizona in the 2019 NHL Draft, the 21-year-old Maccelli played the last two seasons with Ilves Tampere in Finland’s SM-liiga, and represented Finland at the 2020 IIHF World Junior Championship.