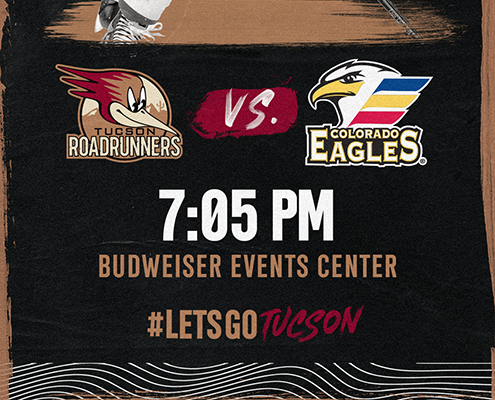 The Roadrunners will take on the Colorado Eagles for the first of two back-to-back games Friday night at the Budweiser Events Center in Loveland, Colorado. Tucson will be looking to extend their active winning streak to four games when they face the Colorado Avalanche affiliate at 7:05 p.m. MST. The Roadrunners and Eagles will be meeting for the first time since April of last season, and the first time in Colorado since February 27, 2021.

Three Things
1) Tucson is entering the series with Colorado on a three-game win streak, including a pair of victories at home Friday and Saturday against the Abbotsford Canucks. The Roadrunners took the first game of the series by a score of 4-1, holding the Canucks scoreless for the final 58:53 of regulation. Tucson faced more resistance the following night but mounted a late comeback from down 4-3 with less than six minutes remaining in the third period. Cameron Hebig tied the game with 5:40 to go, then JJ Moser hammered home the game-winner on the power-play with less than a minute left on the clock to give the Roadrunners a 5-4 victory. During the win streak, two players have recorded multiple-goal performances in linemates Mike Carcone and Cam Hebig.

2) One of the key takeaways from the month of November for the Roadrunners was the success of their rookie skaters. In eight games with Tucson during November, Forward Matias Maccelli tallied six goals and eight assists en route to earning AHL Rookie of the Month honors, while defenseman JJ Moser recorded 3-6-9, leading all Roadrunners blue-liners. Maccelli leads Tucson in total points with 17 in his rookie campaign, and the Roadrunners are one of two teams in the AHL with two rookies leading the scoring, along with the Rochester Americans. Just behind Maccelli for second on the team in goals is first-year forward Ben McCartney with five. In addition, eight of the 11 power-play goals scored by the Roadrunners this year have been off the stick of rookies.

3) Returning to the Roadrunners this weekend from the Arizona Coyotes is forward Hudson Fasching. Fasching will make his first appearance with Tucson since November 13, two weeks after he recorded a hat trick and five total points in a 6-4 win over the San Diego Gulls Saturday, October 30. Fasching played in seven games with the Coyotes this season. He returns to Tucson with 4-6-10 in 10 games with the Roadrunners this season, one of seven players on the active roster with at least four goals. Fasching has 79 points in 133 career games with Tucson, dating back to the 2018-2019 season.

“His game is building. He’s getting more comfortable, and he understands what makes him successful in the American Hockey League, and he’s executing those things… He’s been doing amazing things and doing it on a consistent basis.”

Number to Know
4 – The number of Roadrunners players to earn Rookie of the Month honors with the addition of forward Matias Maccelli for November 2021. Maccelli joins three other players dating back to Tucson’s inaugural 2016-2017 season and becomes the first Roadrunner to be named Rookie of the Month since Dylan Strome in November 2017. The remaining two winners were Kyle Wood and Brendan Perlini in October and November 2016, respectively, the Roadrunners first two months in the Old Pueblo.

We’re Doing It Live
Tonight’s game will be broadcast live on AHLtv, as well as on the radio on Fox Sports 1450AM, or on the iHeartRadio app. Coverage begins at 6:45 p.m. MST with Roadrunners Warm-Up, as Jimmy Peebles gets you ready for the game before “Voice of the Roadrunners” Adrian Denny has the call at 7:05 p.m. live from the Budweiser Events Center in Loveland.