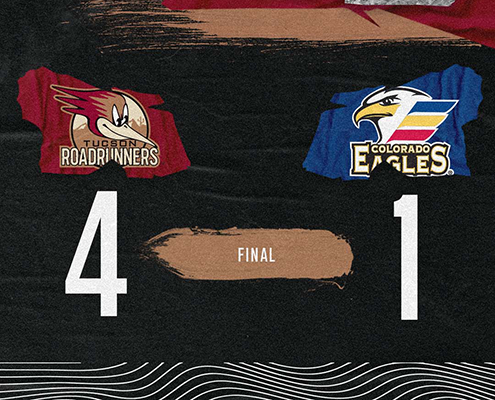 Loveland, Colorado – The Tucson Roadrunners dominated on both the power-play and penalty-kill to come away with a decisive 4-1 victory over the Colorado Eagles Friday night at the Budweiser Events Center in Loveland. Tucson tacked on three goals in the first period and held the Eagles scoreless for the first 56:26 to extend their win streak to four games. Goaltender Ivan Prosvetov was stellar in net, as he stopped the first 26 shots faced and ended the game with 31 total saves.

The Roadrunners faced some early pressure in their own zone by the Eagles, as they recorded eight of the first 11 shots on goal, but netminder Ivan Prosvetov was on his game from the start of the contest and turned all of Colorado’s shots aside. Tucson took a 1-0 lead on their second shot of the night and Hudson Elynuik’s second goal of the season with 6:55 gone by in the opening frame. The Roadrunners went on their first power-play of the night and quickly cashed in with their first special-teams score of the night just 20 seconds later. The goal was scored by JJ Moser, his fifth of the season and third while on the man advantage. Moser leads all Roadrunners defensemen in points, and the goal planted the 21-year-old in the top ten for scoring by defenders in the AHL. The Eagles went on their first power-play of the night less than two minutes after the Moser goal, but the Roadrunners only allowed three shots by Colorado to shut it down with ease. Tucson went back on the power-play late in the opening period, and Mike Carcone rifled off three-straight one-timers at Colorado netminder Pavel Francouz. The third shot proved to be the charm, as the shot by Carcone deflected off the stick of Ben McCartney and into the back of the net, giving the Roadrunners a 3-0 lead with just 34 seconds to play in the first period. The Eagles once again began the period on the attack, rattling off three shots in the first 4:38, but couldn’t get anything past Tucson backstop Ivan Prosvetov. The Roadrunners put an emphasis on defense in the second period, holding the Eagles to just four more shots for the remainder of the period. Tucson killed off two more penalties during the middle frame and took their first trip on the power-play that didn’t produce a goal. As the teams entered the final 20 minutes of play, the Roadrunners dominated the special-teams battle with a perfect 3/3 mark on the penalty kill and 2/4 while on the man advantage themselves. The Eagles had outshot the Roadrunners 18-11 for the first two periods, but Ivan Prosvetov denied any puck that came his way to keep them scoreless. The Roadrunners continued to keep Colorado off the scoreboard until the Eagles pulled goaltender Pavel Francouz with around four minutes to go in the final frame and avoided the shutout with an extra-attacker goal. The Roadrunners came right back with an empty-net score three and a half minutes later to secure their fourth-straight victory.

//youtu.be/RSG1Y6ALqn4The Roadrunners extend their winning streak to four games and will look to keep it going when they once again face the Colorado Eagles Saturday night in Loveland. Saturday’s series finale will start at 7:05 p.m. MST, with coverage beginning at 6:45 on Fox Sports 1450AM with Roadrunners Warm-Up hosted by Jimmy Peebles. Then, “Voice of the Roadrunners” Adrian Denny will have all the action live from the Budweiser Events Center.

“It shows a lot of character from our team, all the boys blocking shots in the last five minutes when we’re up three, it doesn’t matter. We’re all a team and everyone’s putting their bodies on the line, and it shows a lot about us.”

Roadrunners Forward Hudson Elynuik on the full 60-minute effort from Tucson in their 4-1 win over the Colorado Eagles Friday night. Elynuik finished the game with a pair of goals, his first multi-point night of the season.

ICE IN IVAN’S VEINS – Tucson Roadrunners goaltender Ivan Prosvetov earned his second-straight win and fifth overall on the season Friday night against the Colorado Eagles, tallying 31 total saves and keeping the Eagles off the scoreboard until the final 3:34 of the contest.

Tucson Roadrunners forward Travis Barron warms up prior to Friday’s game against his former team, the Colorado Eagle. Barron joined the Roadrunners this past offseason after playing in 54 games over three seasons with the Eagles. The 23-year-old won a crucial face-off which led to a JJ Moser power-play score, the eventual game-winning goal in Friday night’s contest.