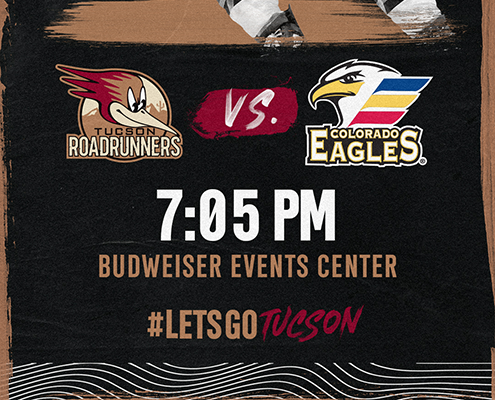 The Roadrunners will face the Colorado Eagles in the second game of a back-to-back series at the Budweiser Events Center Saturday night. Tucson extended their winning streak to four games with a 4-1 victory over the Eagles in the series opener Friday night, which marked the first time in franchise history that the Roadrunners have won the first game of a series against the Eagles in Loveland. Tucson will be looking to earn their second-straight series sweep and extend their overall win streak to five.

Three Things
1) Tucson took the first game of the series in decisive fashion Friday night, as the Roadrunners scored three goals in the first period and kept the Eagles scoreless for the first 56:26 of the contest. During their current four-game win streak, the Roadrunners have averaged 3.75 goals scored per game, while only allowing an average of 1.75 goals by their opponents. Linemates Mike Carcone and Matias Maccelli have both been on point streaks for all four games, combining for 13 total points (5g 8a) during that span.

2) Roadrunners forward Hudson Elynuik scored a pair of goals in Friday night’s 4-1 win against the Eagles, including an empty-net tally to seal the win for Tucson. Elynuik became the third Roadrunner in as many games to record a multiple-goal performance, after Mike Carcone and Cameron Hebig each accomplished the feat last weekend against the Abbotsford Canucks. Carcone scored the first and last goals in Tucson’s 4-1 victory over the Canucks on November 26, and Hebig followed it up the next night with the third and fourth goals of the game and his season, including the equalizing score with 5:40 remaining in regulation, as the Roadrunners took the lead against Abbotsford in the final minute to come away with a 5-4 win.

3) In net for two of the Roadrunners four wins during their current streak has been goaltender Ivan Prosvetov. The 22-year-old recorded his second-straight outing of 29+ saves with only one goal allowed Friday night in Colorado, taking a shutout bid into the final 3:34 of regulation. Prosvetov is now 5-3-1 on the season with two shutouts, 2.32 GAA and a .915 save percentage (SV%), all of which are career highs. Prosvetov is now 3-1 in his last four starts against the Colorado Avalanche’s AHL affiliate and made his NHL debut last season against the Avalanche in Denver.

What’s The Word?
Tucson Roadrunners defenseman and Sweden native Victor Soderstrom on the defensive pairing of him and Switzerland native JJ Moser, after the two combined for a goal and an assist in Friday night’s 4-1 win in Colorado:

“We have a good chemistry, a little bit of a European chemistry there, I think. I like playing with him and he’s a good player.”

Number to Know
6 – The number of Roadrunners players with performances of two goals or more, after forward Hudson Elynuik scored a pair Friday night against the Colorado Eagles. Elynuik became the first Roadrunner to accomplish the feat on the road this season and joins the list that includes Ben McCartney, Hudson Fasching, Matias Maccelli, Mike Carcone, and Cameron Hebig.

We’re Doing It Live
Tonight’s game will be broadcast live on AHLtv, as well as on the radio on Fox Sports 1450AM, or on the iHeartRadio app. Coverage begins at 6:45 p.m. MST with Roadrunners Warm-Up, as Jimmy Peebles gets you ready for the game before “Voice of the Roadrunners” Adrian Denny has the call at 7:05 p.m. live from the Budweiser Events Center in Loveland.