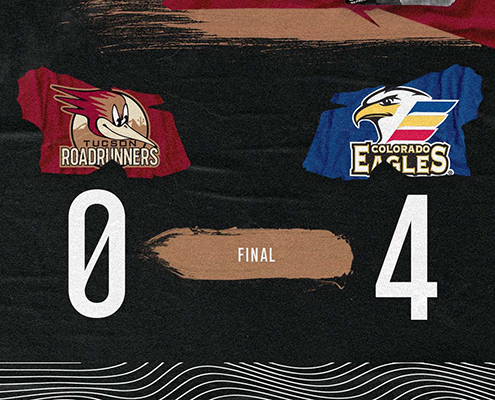 Loveland, Colorado – The Tucson Roadrunners fell to the Colorado Eagles by a score of 4-0 Saturday night at the Budweiser Events Center, putting an end to Tucson’s active win streak at four games. Roadrunners goaltender Ivan Prosvetov stopped the first 20 shots he faced, and ended his night with 30 total saves. Colorado had six trips to the man advantage, scoring on one, while the Roadrunners came up empty-handed on their lone power-play of the contest.

The Eagles were once again on the attack early, recording the first 11 shots on goal to open the first period, including four on their first power-play of the night. Colorado took two trips to the power-play in the first 20 minutes, but Tucson goaltender Ivan Prosvetov turned everything aside, setting a season high for saves in a period with 16. The Roadrunners drew their first man advantage of the evening with 21 seconds remaining in the opening frame, but it carried over into the second period without a goal. The game remained scoreless until the 6:47 mark of the middle frame, when Colorado scored their first goal of the night to take a 1-0 lead. The Eagles scored their first power-play goal of the weekend just 24 seconds later, extending the lead to 2-0. Colorado didn’t let up and scored another goal with 4:20 left to play in the middle period, giving the Eagles their third goal of the period after the Roadrunners hung a three-goal period on them the night before. Tucson entered the third period facing a three-goal deficit, needing to produce some offense to mount a comeback. The Roadrunners saw an increase in their shots on goal total for the third period but surrendered a fourth goal to the Eagles and couldn’t find the back of the net themselves, leading to a 4-0 defeat and an end to the team’s win streak at four games.

The Roadrunners will be back home for four games in six nights at the Tucson Arena beginning with a back-to-back series with the Stockton Heat Friday and Saturday night. Both games are set to face-off at 7:00 p.m. MST, with coverage beginning at 6:45 on Fox Sports 1450AM with Roadrunners Warm-Up hosted by Jimmy Peebles. Then, “Voice of the Roadrunners” Adrian Denny will have all the action live from the Tucson Arena.

“You have to give credit to [Colorado]. They stuck to their plan and did it well, kind of like we did against them last night. Kudos to them, but some bad bounces and a lot of time in the box tonight didn’t help us either.”

Roadrunners Defenseman Cole Hults on the strength of the Colorado Eagles in Saturday’s 4-0 road loss in Loveland. Tucson split the series with the AHL affiliate of the Colorado Avalanche with one win apiece.

HOSTING THE HEAT – The Roadrunners head back to the Old Pueblo for a four-game homestand that kicks off with a pair of games with the Stockton Heat. The Heat enter the series atop the AHL Pacific Divison, after the Roadrunners split the opening weekend series with the Calgary Flames AHL affiliate in Stockton October 15 and 16. Roadrunners goaltender Ivan Prosvetov earned his first of two shutouts to open his season at the Stockton Arena, stopping all 29 shots faced in the 1-0 overtime victory.

Watch Tucson Roadrunners goaltender Ivan Prosvetov deny the Colorado Eagles in the first period of Saturday’s contest, with some pushing and shoving behind the net shortly after. Prosvetov stopped the first 20 shots faced Saturday, including a scoreless first period at the Budweiser Events Center.

Defenseman Chaz Reddekopp made his Tucson Roadrunners debut Saturday night against the Colorado Eagles at the Budweiser Events Center in Loveland. He previously appeared in two games this season with the Belleville Senators after appearing in 78 games over the last four seasons in the AHL Pacific Division. Reddekopp spent three seasons with the Ontario Reign before he played in 13 games for the San Jose Barracuda last season.

Tucson Roadrunners Road Ahead: Hosting The Heat
Scroll to top