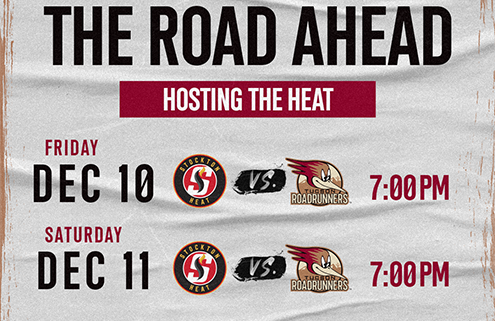 Tucson enters the week having won four of their last five games, including two on the road in Iowa and Colorado. The Roadrunners have outscored their opponents 15-7 during that span, averaging three goals per game while only allowing 2.2 goals per game by their opponents. Tucson will look to get another win streak started this weekend back home at the Tucson Arena against the Stockton Heat, followed by a pair of midweek games with Henderson Silver Knights Tuesday and Wednesday.

The Roadrunners return home to host the red-hot Stockton Heat for a pair of games at the Tucson Arena Friday and Saturday night. Tucson beat the Calgary Flames AHL affiliate opening night in Stockton, which was the Heat’s only loss until November 13. The weekend marks the beginning of the Roadrunners final home stand before Christmas and will be filled with fun. Friday’s game has a ticket package that includes a special pregame meet and greet with Spider-Man and will feature the second 3-2-3 night of the season. All fans can purchase $3 hot dogs, $2 soft drinks, and $3 draft beers during Friday’s game, as well as hot chocolate for $3 (or $6 with a shot of Holiday Cheer) all month long. Saturday night is the TEP Teddy Bear Toss game, one of hockey’s best feel-good traditions. Fans can bring new stuffed animals to toss onto the ice after the Roadrunners first goal of the game. The stuffed animals will then be collected and donated to Aviva Family Services. Tickets for both games, as well as the Spider-Man Meet and Greet Package can be purchased HERE.

After the pair of games with the Stockton Heat this weekend at the Tucson Arena, the Roadrunners will welcome the Henderson Silver Knights into town for the first time since April 3 of last season. Both games will feature Arizona-inspired food specials with $2 shredded chicken tacos with toppings, as well as $2 draft beers and soft drinks on Tuesday, followed by enchiladas and a spicy ice michelada for $10 on Wendesday. Tickets for both games can be purchased HERE.

Even Series With The Eagles

The Roadrunners traveled to Colorado last weekend for a back-to-back series with the Eagles Friday and Saturday at the Budweiser Events Center in Loveland. Tucson took the first game in decisive fashion, keeping Colorado scoreless for the first 56:26 of the contest to come away with a 4-1 win. Forward Hudson Elynuik scored a pair of goals for his first multi-point performance of the season, and goaltender Ivan Prosvetov posted his second-straight game of 29+ saves and just one goal allowed, as he denied 31 of the 32 shots faced.

A bulk of the Roadrunners recent offensive production has come from their first-year players, including November’s AHL Rookie of the Month Matias Maccelli. Maccelli is tied for fourth for all rookies in points (18), and JJ Moser is tied for most goals by AHL defenders (5). Maccelli, Moser, and forward Ben McCartney are all share the third-most power-play goals by first-year skaters with three apiece. Maccelli (18) and Moser (12) lead the Roadrunners in total points, and McCartney joins them in the top three in goals.

Goaltender Ivan Prosvetov started both games in net for the Roadrunners last weekend against the Colorado Eagles and recorded 66 total saves over the pair of contests, setting a season-high on consecutive nights. Prosvetov has a 3-2 record over his last three starts, and currently has a GAA of 2.55 and a .912 save percentage on the season, both of which are career-bests. His two shutouts are tied for second-most in the AHL, which he earned in his first two starts of the season.

Members Of The Multi-Goal Game Club

When forward Hudson Elynuik recorded two goals in Friday’s 4-1 win over the Colorado Eagles, he joined a club of five other Roadrunners with a multiple-goal game this season. The first three were hat tricks in three consecutive series at home by Ben McCartney, Hudson Fasching, and Matias Maccelli. Michael Carcone and Cameron Hebig accomplished the feat in back-to-back games against the Abbotsford Canucks on November 26 and 27. Elynuik became the first Roadrunner this season to score multiple goals in a game on the road, and first since Michael Carcone netted a pair of goals on May 8 against the Stars in Texas.

Detailing December For The Roadrunners

After opening the month of December with a pair of games on the road against the Colorado Eagles, the Roadrunners are back home in the Old Pueblo for four games in six days with the Stockton Heat and Henderson Silver Knights. Tucson will then embark on a three-game, two country road trip beginning December 18 against the Ontario Reign, before traveling to Abbotsford, BC for the first time in franchise history. Then, the Roadrunners will be back in Tucson to ring in the new year, as they’ll take on the San Diego Gulls on New Year’s Eve.

The Roadrunners had one of their best special-teams performances of the season on Friday in Loveland against the Colorado Eagles, scoring twice on the power-play and holding the Eagles scoreless while on the man advantage themselves. Friday’s 4-1 win was the second time this season where Tucson scored multiple power-play goals and were perfect on the penalty-kill. The Roadrunners scored three power-play goals on five chances and held the Ontario Reign scoreless in four trips on the man advantage in Tucson’s 8-4 win on November 12.

RRTV In The Community: Head Of The Class
Scroll to top