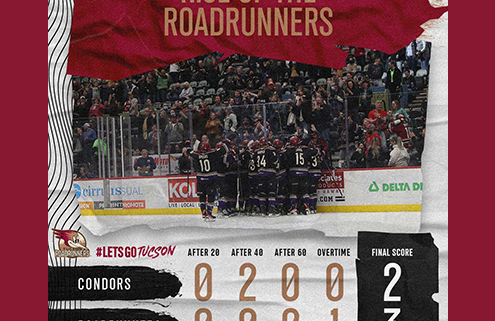 Tucson, Arizona – The Roadrunners wrapped up their home series with the Bakersfield Condors in dramatic fashion Saturday night at the Tucson Arena. Tucson erased a two-goal deficit midway through the third period to force overtime, before Ben McCartney netted the game-winner for his second goal of the night. Saturday’s matchup was also Star Wars night at the Tucson Arena, as well as a Kachina Saturday. The second-largest crowd of the season, 5,323 fans came out to show their support for the Roadrunners, as well as their love for Star Wars.

Both teams traded chances on the power-play near the midway point of the first period, with the best scoring chance coming on a shorthanded rush by Ben McCartney. After the pair of penalties ran out, the score was still even at zero. The Roadrunners continued to put pressure on the Condors for the rest of the opening frame, outshooting them 11 to three after the first 20 minutes of action. Despite Tucson’s strong presence in the Bakersfield zone to close out the opening frame, both teams remained scoreless at the start of the second. After a scoreless first period, the first goal of the contest came just 36 seconds into the middle frame when Bakersfield capitalized on a two-on-one chance in transition. Bakersfield added to their lead with a shorthanded goal after each team picked up penalties around the same time, making the score 2-0. The Roadrunners entered the final 20 minutes of regulation trailing by two but outshooting the Condors 24 to 11. It took 6:47 into the third period, but Tucson found the back of the net for the first time in the contest. Cameron Hebig scored his ninth goal of the season and second of the weekend to get the Roadrunners on the board. The score put Hebig one goal behind Matias Maccelli, Mike Carcone and Jan Jenik for the team lead. Less than two minutes later, the Roadrunners got even with the Condors. Forward Ben McCartney netted the first power-play goal of the night for either team to tie the game up with 10:25 still to play in regulation. With an assist on the goal, Cameron Hebig notched his second multiple-point outing of the weekend. It took 2:48 for Tucson to erase their late two-goal deficit, but it took another 10:25 without a goal to force overtime. Less than a minute into the extra three-on-three period, Ben McCartney struck again, scoring the game-winning goal and snapping the Roadrunners losing streak with a 3-2 comeback victory. Roadrunners goaltender Ivan Prosvetov earned his sixth win of the season on home ice, stopping 16 shots on goal.

The Roadrunners head out on the road for another two-week, six-game trip across California, British Columbia, and Colorado. They’ll begin with a two-game set against their I-8 Border Rivals, the San Diego Gulls. Game one of the series is scheduled for Friday, February 4 at 8:00 p.m. MST with coverage beginning at 7:45 on Fox Sports 1450AM with Roadrunners Warm-Up hosted by Jimmy Peebles. Then, “Voice of the Roadrunners” Adrian Denny will have all the action live from the Pechanga Arena in San Diego.

“I can’t take full credit for any of that. On the first goal, [Matias Maccelli] made a heads-up play, and we got a nice bounce, and I found the back of the net. On the second one, [Vlad Kolyachonok] made a nice stick check. I think the whole team played a good game. Throughout the lineup, everyone knows their jobs, everyone’s playing an impactful game, and it’s nice to get a win.”

Roadrunners forward Ben McCartney on scoring the overtime game-winning goal. The score was his second goal of the night, after the 20-year-old netted the equalizer with 10:25 still to play in the third period.

PILING ON THE POINTS – The Roadrunners had three players record multiple-point nights in Saturday’s 3-2 overtime win against the Bakersfield Condors. Forwards Ben McCartney, Cameron Hebig, and Matias Maccelli each put up a pair of points in three different ways. McCartney scored two of Tucson’s three goals, including the overtime game-winner, while Hebig tallied a goal and an assist and Maccelli racked up two assists.

The Roadrunners celebrated Star Wars Night at the Tucson Arena on Saturday, with fans representing their love for Star Wars as well as hockey in Southern Arizona. Saturday was also a Kachina Saturday, as the Roadrunners donned their alternate Kachina uniforms as they took on the Bakersfield Condors.

Tucson Roadrunners Road Ahead: Taking Another Trip
Scroll to top