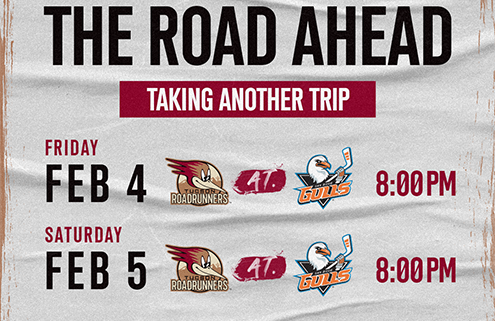 The Roadrunners head back out on the road for another two-week, six-game stretch that will see the team travel to California, British Columbia, and Colorado. The trip will begin with a two-game set this weekend against Tucson’s I-8 Border Rivals, the San Diego Gulls. Friday’s series opener will mark the first meeting between Tucson and San Diego since October 30, when the Roadrunners took down the Gulls 6-4 to close out the two-game series at the Tucson Arena. In that game, forward Hudson Fasching recorded his second-career AHL hat trick and tied a Roadrunners franchise record with a five-point performance.

The Tucson Roadrunners and their fans celebrated Star Wars Night at the Tucson Arena on Saturday as they took on the Bakersfield Condors. The season’s second-largest crowd of 5,323 fans came out to show their support for both hockey in Southern Arizona and Star Wars. Tucson came away with a 3-2 come-from-behind victory in overtime, after erasing a 2-0 deficit in the third period. Fans came dressed up their favorite Star Wars characters, with Roadrunners Mascot Dusty even joining in on the festivities.

The Tucson Roadrunners will be back in the Old Pueblo on Saturday, February 19, to kick off a four-game home stand at the Tucson Arena. The Roadrunners will face the Henderson Silver Knights and Ontario Reign for two games piece over two weekends. The series with Henderson will be all about the youngest Roadrunners fans, as the first 1,500 kids 12 and under at Saturday’s game will receive a Youth Kachina Jersey courtesy of Dental Pros. The next day, all kids 12 and under can see the Roadrunners 4:00 p.m. matchup with the Silver Knights for free with a paying adult, along with a special offer of $6 Kids Meals. The following weekend of Saturday, February 26 and Sunday, February 27 marks Cancer Awareness Weekend. The Roadrunners will wear their specialty Cancer Awareness Jerseys for both contests against the Ontario Reign, with a portion of ticket sales going to the American Cancer Society. For information on both weekends and to purchase tickets, click HERE.

In the series finale against the Bakersfield Condors Saturday night, Tucson rallied from down 2-0 in the third period to come away with a 3-2 overtime victory. Forward Ben McCartney netted the game-tying goal with 10:25 remaining in regulation, as well as the overtime game-winner just 50 seconds into the extra three-on-three period. Goaltender Ivan Prosvetov earned his sixth win at home on the season, stopping 16 shots on goal. Saturday marked the fourth-straight game where the Roadrunners netted a power-play goal, with seven goals while on the man advantage over that span.

Tucson Roadrunners forward Matias Maccelli has continued his impressive rookie campaign, racking up 17 points in his last 12 outings. The 21-year-old leads all AHL rookies in points with 36 and a 1.13 points-per-game average (minimum 25 games played). Maccelli is also fourth in the American Hockey League in assists with 26, and ninth in overall scoring.

At the midway point of the 2021-2022 season, the Roadrunners have ten skaters that have tallied double-digit point totals. Matias Maccelli, Jan Jenik, and Mike Carcone each lead the team with ten goals, while Hudson Fasching, Victor Soderstrom, and Vlad Kolyachonok join them as the six players with at least ten assists. In all, 29 different players have tallied a point for Tucson this season.

Stealing The Show With Shots On Goal

Defenseman Cam Dineen returned to the Roadrunners roster for two games over the three-game series with the Bakersfield Condors, after a 14-game stint in the NHL with the Arizona Coyotes that included his debut on November 5 against the Anaheim Ducks. The 23-year-old recorded a point in each of the two contests, including a crucial assist in Tucson’s 3-2 comeback victory on Saturday. Dineen has five points (2g 3a) in six outings with the Roadrunners this year, after appearing in 136 games with Tucson over the last three seasons. The Arizona Coyotes selected Dineen in the third round (68th overall) of the 2016 NHL Draft. He was recalled to the Arizona Coyotes Taxi Squad on Monday.

Rookie defenseman Vlad Kolyachonok currently possesses the longest assist streak in the AHL this season at seven-consecutive games with an assist. The streak ties a Roadrunners franchise record for longest point streak by a defenseman, which was first set by Kyle Wood in December 2016. Kolyachonok made his NHL debut with the Arizona Coyotes on January 12, appearing in four games over six days.