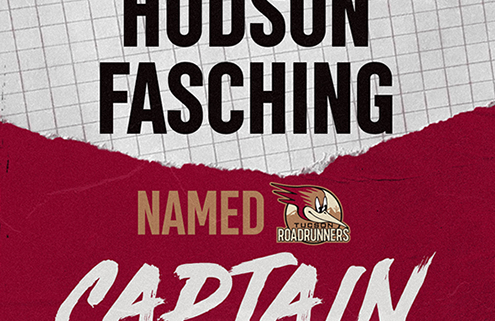 San Diego, California – The Tucson Roadrunners, owned and operated by the Arizona Coyotes, announced today that Hudson Fasching has been named the team’s captain.

In his fourth year with the organization, Fasching has appeared in 145 games with the Roadrunners and totaled 40 goals and 47 assists for 87 points. This season, with seven games played with the Arizona Coyotes as well, Fasching has five goals and 13 assists for 18 points in 22 games with Tucson. He is third all-time on the Roadrunners in goals scored, sixth in points and ranks ninth all-time in games played.

“I think when you think Hudson Fasching, you think reliable, you think of a guy that can do a bit of everything here and also be an asset for the organization,” said Head Coach Jay Varady “He’s been with us a long time now, he’s been able to play games in the NHL, he’s been able to be on the Taxi Squad and he’s our Captain, he’s done a good job with the group.”

Fasching, 26, arrived to the desert in a trade in June of 2018 and signed a two-year, two-way contract with the Coyotes after his first season with Tucson where he finished third on the team with a career-high 16 goals for the 2018-2019 campaign. During the shortened 2019-2020 season, Fasching again set a career-high with 19 goals; which finished second on the team during the Roadrunners Pacific Division Championship campaign. The Milwaukee, Wisconsin native was signed to a one-year, two-way contract by the Coyotes in July of 2021 after spending most of the previous season with the NHL club’s Taxi Squad and appearing in two games with Tucson where he tallied an assist.

The six-foot-three forward played collegiately at the University of Minnesota and before that with the United States National Development Team. He was originally drafted by the Los Angeles Kings in the fourth round of the 2013 NHL Entry Draft.

The Tucson Roadrunners will be back in the Old Pueblo on Saturday, February 19, to kick off a four-game home stand at the Tucson Arena. The Roadrunners will face the Henderson Silver Knights and Ontario Reign for two games piece over two weekends. The series with Henderson will be all about the youngest Roadrunners fans, as the first 1,500 Kids 12 and under at Saturday’s game will receive a Youth Kachina Jersey courtesy of Dental Pros. The next day, all kids 12 and under can see the Roadrunners 4:00 p.m. matchup with the Silver Knights for free with a paying adult, along with a special offer of $6 Kids Meals. The following weekend of Saturday, February 26 and Sunday, February 27 marks Roadrunners Fight Cancer Weekend. The Roadrunners will wear their specialty Cancer Awareness Jerseys for both contests against the Ontario Reign. For information on both weekends and to purchase tickets, click HERE.