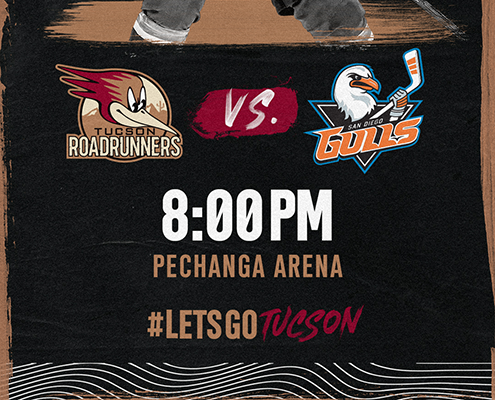 The Tucson Roadrunners embark on another extended road trip beginning Friday night with the first of two games against the San Diego Gulls. The Roadrunners will be back at the Pechanga Arena in San Diego Friday and Saturday for the first time since February 7, 2020. The I-8 Border Rivals have split the season series so far at one win apiece, with six matchups remaining on the season. The Roadrunners won the most recent meeting with the Gulls on October 30 by a score of 6-4, backed by newly-named Captain Hudson Fasching’s five-point performance; which included his second career AHL hat trick. The 26-year-old Fasching has been named Captain of the Tucson Roadrunners in his fourth season with the team, having appeared in 145 games with 87 points (40g 47a). His only two games with Tucson last season were against the San Diego Gulls at home on April 9 and 10, 2021.

Three Things
1) Friday’s game marks the beginning of Tucson’s second six-game road trip since the start of 2022. The Roadrunners will play a pair of games each against the Gulls in San Diego, the Canucks in Abbotsford, BC, and the Eagles in Colorado over a span of nine days. Tucson is ahead of San Diego in the standings by one point with the same number of games played (34), as both teams open the second half of their schedule Friday night. The road trip will round out a stretch for the Roadrunners with 12 of their 15 games played away from home, dating back to January 12 in San Jose.

2) Over their last two games against the Bakersfield Condors, Tucson dominated in two key categories: shots on goal and power-play opportunities. The Roadrunners took 14 trips to the man-advantage over the back-to-back weekend matchups at the Tucson Arena and outshot the Condors 68-36 over that span. Tucson recorded more shots on goal in all six regulation periods, as well as the extra three-on-three overtime in Saturday’s win. The Roadrunners netted three power-play goals while only allowing one in five shorthanded situations and ended the three-game home stand on a high note with a 3-2 come-from-behind victory in overtime.

3) Roadrunners rookie forward Matias Maccelli has been climbing the ranks of the AHL in scoring this season, as the 21-year-old is fourth in the league in assists (26) and ninth in overall points (36). Maccelli leads both the Roadrunners and all AHL rookies in both categories, along with being one of three Tucson skaters with double-digit goals and assists. 18 of his 36 points have been recorded while on the power-play, including four goals during the man-advantage. Maccelli has racked up 15 points in just 11 games since the start of 2022, with four multiple-point performances. Another rookie making noise for the Roadrunners is the 20-year-old Ben McCartney, who scored both the game-tying and game-winning goal in Saturday’s 3-2 comeback win in overtime to close out the three-game home stand with the Bakersfield Condors. The performance gave McCartney his fourth multiple-point performance of the season, which includes a goal and an assist on October 30 at home against San Diego.

“It’s my first time wearing the ‘C’, it’s an honor to have that role and to have the respect of the guys. It’s a big responsibility and I’m excited to take it on.

Number to Know
7 – The number of consecutive games in which Roadrunners defenseman Vlad Kolyachonok has recorded an assist, tying a season-high in the AHL. The 20-year-old rookie can set a Tucson franchise record for longest scoring streak by a defenseman with a point in Friday’s game against the San Diego Gulls. Also returning to the Roadrunners blue line is Cam Dineen. The 23-year-old appeared in two of the three games against the Bakersfield Condors at the Tucson Arena last week, tallying a point in each outing (1g 1a).

We’re Doing It Live
Today’s game will be broadcast on AHLtv, as well as on the radio on Fox Sports 1450AM, or on the iHeartRadio app. Coverage begins at 7:45 p.m. MST with Roadrunners Warm-Up, as Jimmy Peebles gets you ready for the game before “Voice of the Roadrunners” Adrian Denny has the call at 8:00 p.m. live from Pechanga Arena.