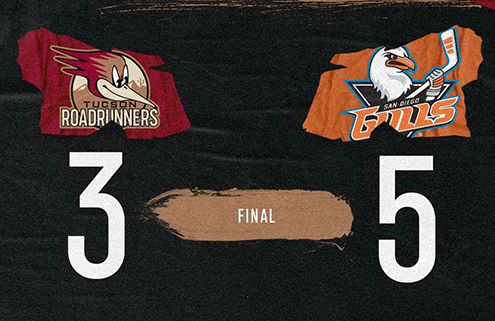 San Diego, California – The Tucson Roadrunners kicked off their second six-game road trip of 2022 Friday night against the San Diego Gulls at Pechanga Arena. The contest marked the third meeting between the I-8 Border Rivals on the season, as the Gulls defended their home ice with a 5-3 win over the visiting Roadrunners. Tucson’s top-two scorers Matias Maccelli (2a) and Mike Carcone (2g) each notched multiple-ponit performances, while goaltender Ivan Prosvetov stopped 20 shots on goal in his first start against San Diego on the year.

Tucson opened the scoring at the 7:51 mark of the first period, as forward Hudson Fasching slipped the puck past San Diego backstop Lukas Dostal in his first game as Captain of the Roadrunners. Fasching was awarded the goal during the a media timeout after the play was blown dead on the ice, giving the 26-year-old his second score in the last three games and sixth on the season. The Roadrunners continued to create scoring chances, outshooting the Gulls ten to six in the opening frame. Neither team committed a penalty in the first period, but an interference minor on Tucson sent the Gulls to the power-play just 1:25 into the second period. San Diego capitalized on the opportunity to tie the game up at one 34 seconds into the man-advantage. The next penalties of the night came less than four minutes later when Tucson’s Tyson Empey dropped the gloves with San Diego’s Hunter Drew at center ice, earning the pair five minutes apiece for fighting. A San Diego face-off violation on the ensuing draw sent the Roadrunners on their first man-advantage of the contest. Roughly a minute into the special-teams situation, the Gulls turned a bouncing puck into a three-on-one and shorthanded score to give the home team their first lead of the evening. Tucson quickly erased the deficit with a quick goal in transition near the midway point of the period. Mike Carcone took a precision set-up pass from Matias Maccelli to score his team-leading eleventh goal of the season, evening the score at 2-2. Like the first period, the second half of the middle frame was without any penalties or goals, and the I-8 Border Rivals were tied at two heading into the final 20 minutes of regulation. The Gulls broke the stalemate just over four minutes into the third period and added to their new lead a minute and a half later for a 4-2 advantage. Tucson got back to within one when Mike Carcone netted his second goal of the game with 6:40 still to play in the period. Matias Maccelli once again set up the score to join Carcone in recording a multiple-point performance. Still trailing by a goal late in the period, the Roadrunners pulled goalie Ivan Prosvetov for an extra attacker, but an empty-net score by San Diego secured a 5-3 win for the hometown Gulls.

“It’s nice to have Hudson Fasching back, as well as Victor Soderstrom and Cam Dineen. Those are all big parts of our team as you can see from Fasching, he got the ‘C’ so you can see how much he means to our team. Soderstrom and Dineen are big pieces playing big minutes too. It’s great to have those guys back and it definitely helps.”

Roadrunners forward Mike Carcone on having players like Hudson Fasching, Victor Soderstrom and Cam Dineen in the lineup as Tucson enters the second half of the season.

THE CAPTAIN KICKS OFF THE SCORING – Newly-named Captain of the Tucson Roadrunners Hudson Fasching kicked off the scoring in Friday night’s contest with the San Diego Gulls, giving the Roadrunners a 1-0 lead with 7:51 gone by in the first period. The 26-year-old has three points in his last four outings and is in the top four for both team assists and overall scoring with 6-13-19 in 23 games played.

Watch Tucson Roadrunners forward Mike Carcone bury the puck for his second goal of the game Friday night against the San Diego Gulls. Carcone took sole possession of the team lead for goals with his eleventh and twelfth on the season, as the 25-year-old looks to lead the Roadrunners in goals for the second-consecutive season.

Tucson Roadrunners forward Tyson Empey drops the gloves with San Diego’s Hunter Drew in the second period of Friday’s matchup with the Gulls. The bout marked Empey’s sixth fight of the season, and second in the last three games. The 26-year-old previously fought Hunter Drew when the Roadrunners and Gulls met on October 30 at the Tucson Arena.