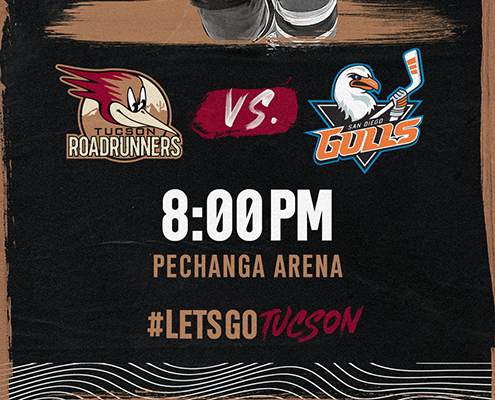 The Tucson Roadrunners round out the weekend with the second of two games against their I-8 Border Rivals, the San Diego Gulls. Tucson will look to even up the season series at two wins apiece after the home team Gulls won the series opener by a score of 5-3 Friday night. That game saw each squad take just two trips to the man-advantage, after a combined 16 power-play opportunities over a pair of matchups at the Tucson Arena on October 29 and 30.

Three Things
1) The Roadrunners outshot their opponents for the third-straight game in Friday’s series opener against the Gulls, with Tucson firing off 30 shots to San Diego’s 25. Leading the way was forward Mike Carcone, who fired off six shots which resulted in a pair of goals for the 25-year-old. Carcone broke a tie with Jan Jenik and Matias Maccelli for the team lead in goals with his eleventh and twelfth strikes of the season. Mike could become the first-ever skater to lead the Roadrunners in goals for back-to-back seasons, after lighting the lamp 15 times in his first campaign with Tucson last year.

2) Forward Hudson Fasching suited up for his first game as Captain of the Tucson Roadrunners Friday night, and he began his tenure by netting the opening goal of the contest in the first period. The 26-year-old has more points against San Diego than any other team this season, after he put up a five-point performance and his second-career AHL hat trick against the Gulls at home on October 30. Fasching was named Captain of the Roadrunners earlier this week after appearing in 145 games and totaling 87 points for Tucson. Hudson has also played in 12 NHL games with the Arizona Coyotes over the last two years and spent the majority of last season on the team’s Taxi Squad in Glendale alongside Roadrunners Head Coach Jay Varady.

3) Tucson and San Diego saw a familiar sight in the second period of Friday’s series opener when forwards Tyson Empey and Hunter Drew dropped the gloves for the second time in three meetings between these teams. The two previously went at it in an October 30 matchup at the Tucson Arena that saw the Roadrunners come away with a 6-4 victory, with Empey tallying an assist. The 26-year-old is tied with Boko Imama for the team lead in fights with six bouts apiece, and trails only Imama for total penalty minutes.

What’s The Word?
Roadrunners forward Cameron Hebig on the importance of a full team effort every night as Tucson enters the second half of the season:

“I think with this lineup we need to spread around [the scoring]. Everyone needs to contribute on a nightly basis. There are ups and downs in a year, so when one guy’s down, another guy has to pick them up. We’re all pulling on the same rope, and that’s how we’re going to be successful; when everyone’s bought in and everyone’s hungry to work.”

Number to Know
9 – The number of multiple-point performances by Roadrunners rookie Matias Maccelli in 33 outings this season. The 21-year-old added his latest in Friday night’s series opener against the San Diego Gulls, as he assisted on each of Mike Carcone’s goals. Maccelli has four multi-point nights in his last six games, with ten total points during that span.

We’re Doing It Live
Today’s game will be broadcast on AHLtv, as well as on the radio on Fox Sports 1450AM, or on the iHeartRadio app. Coverage begins at 7:45 p.m. MST with Roadrunners Warm-Up, as Jimmy Peebles gets you ready for the game before “Voice of the Roadrunners” Adrian Denny has the call at 8:00 p.m. live from Pechanga Arena.