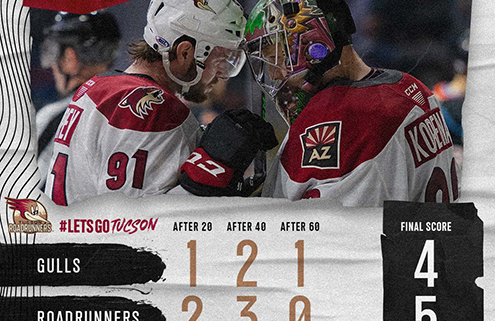 San Diego, California – The Tucson Roadrunners concluded their weekend series with the San Diego Gulls Saturday night at the Pechanga Arena, defeating their I-8 Border Rivals by a score of 5-4. Forward Mike Carcone extended his team lead for goals with his third-career AHL hat trick, matching his goal total from last season at 15. Matias Maccelli (1g 2a) and Cam Dineen (3a) also put up three-point performances in the victory, while Tucson goaltender Josef Korenar set a season-high for most saves in a win with 30 shots turned aside.

San Diego got on the board first when a puck sent in from the neutral zone bounced off the back wall, giving the Gulls an unexpected look at the net and a 1-0 lead. The Roadrunners answered back 2:31 later with their first power-play goal of the weekend, when Mike Carcone turned a dish from Cam Dineen into a one-timer past Gulls backstop Olle Eriksson Ek to tie the game at one. Dineen and Carcone connected for another goal less than six minutes later to take a 2-1 lead, this time while at even strength. Tucson was called for a penalty in the first minute of the second period which led to a Gulls power-play strike, evening the score at 2-2. Tucson got back on top 2:32 later when Cameron Hebig notched his tenth goal of the season, once again assisted by Cam Dineen. The Cam-to-Cam score gave Dineen his first-ever three-point performance in the AHL and first multi-point game with Tucson this year, while Hebig became one of four Roadrunners with ten goals on the season. Tucson tacked on another when Matias Maccelli buried the puck for his eleventh goal of the season, which gave the Roadrunners the first multi-goal lead of the contest at 4-2. The Gulls grabbed another goal on the man-advantage just under four minutes later in the middle frame, pulling back to within a goal. Tucson once again had an answer to a San Diego score, as Mike Carcone completed the hat trick with 7:24 still to play in the second period, pushing the lead back out to 5-3. Matias Maccelli assisted on the goal to join Carcone and Dineen as Roadrunners with three points on the night. Tucson clamped down on defense for the remainder of the middle frame and continued to dominate puck possession in the third period. The Gulls made it a game again when they brought out an extra attacker in the final minutes of regulation, scoring a goal with 2:12 on the clock to get back to within one. Tucson was able to shut down a last-ditch effort by San Diego with more timely saves by Josef Korenar, earning the 5-4 win and series split with their I-8 Border Rivals.

The Roadrunners will head up the coast to Abbotsford, BC for the first time in franchise history to take on the Canucks in a pair of midweek matchups Monday and Wednesday. Both games are slated to face-off at 8:00 p.m. MST with coverage beginning at 7:45 on Fox Sports 1450AM with Roadrunners Warm-Up hosted by Jimmy Peebles. Then, “Voice of the Roadrunners” Adrian Denny will have all the action live from the Abbotsford Centre.

“I think everyone did their job tonight. Obviously that top line had a very good night for us, the power-play was clicking, and they led by example. Good job by [Josef Korenar] to shut the door at the end there.”

Roadrunners forward Stephen Harper on Tucson’s 5-4 win over the San Diego Gulls Saturday night on the road. The 26-year-old has recorded a plus/minus of even or better in six of his nine appearances with the Roadrunners on the season.

THREE FOR THREE – The Roadrunners had three different players record three points in Saturday’s 5-4 win over the San Diego Gulls. Defenseman Cam Dineen was the first to accomplish the feat, with an assist on each of the first three Tucson goals. Mike Carcone completed his third-career AHL hat trick midway through the second period to join Dineen, while rookie forward Matias Maccelli assisted on two of Carcone’s goals with a second-period score of his own to round out the list. In Carcone’s last eight outings against the Gulls, the 25-year-old has 12 goals and four assists dating back to April 9.

Watch Tucson Roadrunners forward Mike Carcone score his third goal of Saturday’s matchup with the San Diego Gulls in California. The goal came in the second period and gave Carcone his second-career hat trick as a member of the Roadrunners. The 25-year-old previously had a four-goal performance against San Diego on April 9, 2021, as well as a four-assist night against the Gulls on May 1, 2021.

Tucson Roadrunners forward Cameron Hebig handles the puck in Saturday’s meeting with the San Diego Gulls. The 25-year-old scored a goal in the second period to become the fourth Roadrunners with double-digit goals on the season, extending his active scoring streak to four games. Hebig has nine points in his last seven outings and is a goal away from matching his career-high which he set back in his 2018-2019 rookie campaign.

Tucson Roadrunners Road Ahead: To Canada And Colorado
Scroll to top