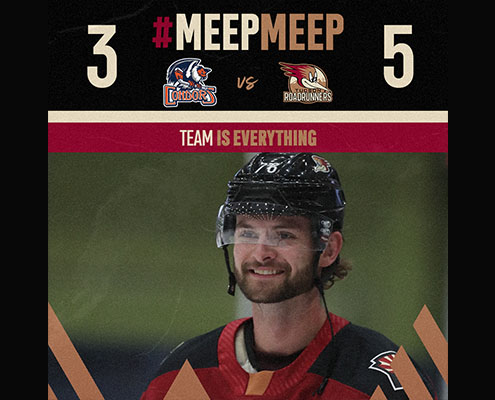 Tucson, Arizona – The Tucson Roadrunners returned from the road Saturday for Opening Night presented by the Arizona Daily Star. In front of an electric Tucson Arena crowd of 4,576, the Roadrunners took down the Bakersfield Condors by a score of 5-3. The win was fueled by a four-goal second period to pull away from the Edmonton Oilers AHL affiliate, as well as a 16-save opening frame by Tucson netminder Ivan Prosvetov. Prosvetov went on to record 28 saves to improve to a 2-0 individual record on the season.

Roadrunners Captain Adam Cracknell opened the scoring in Saturday’s Home Opener with a goal against his former team, the Bakersfield Condors. Cracknell’s goal was his first of the season and gave Tucson a 1-0 advantage just 53 seconds into the contest.

POWER-PLAY POWERS THE OFFENSE – The Roadrunners high-scoring second period featured three power-play scores on three consecutive trips to the man-advantage. Laurent Dauphin, Cam Dineen, and Mike Carcone all lit the lamp in the span of 11:30 to extend Tucson’s lead to 5-1 at the end of the middle frame. The three each finished the night with a goal and an assist, and forward Jan Jenik was counted for assists on both Dineen and Carcone’s scores.

As part of Opening Night presented by the Arizona Daily Star, the Tucson Roadrunners players were welcomed into the Tucson Arena with the traditional Red Carpet Reception. Goaltender Ivan Prosvetov and the rest of Saturday’s lineup were met by the Tucson faithful and mascot Dusty before their 5-3 win over the Bakersfield Condors.

“That’s the calmest we’ve seen [Ivan]. He’s made some massive improvements this summer and it shows. He just has to stay with it, stay composed, and be ready for his next challenge.”

Roadrunners Head Coach Steve Potvin on the performance of goaltender Ivan Prosvetov in Saturday’s 5-3 win over Bakersfield. Prosvetov stopped 28 shots in the win, including 16 in the opening frame.

Tucson got on the board quickly with a goal by Captain Adam Cracknell less than a minute into the opening frame to grab a 1-0 lead. The goal was Cracknell’s first time lighting the lamp as a Roadrunner, and it came against his former team in the Condors. Bakersfield answered back with shorthanded goal to even the contest at one with 11:12 remaining in the opening period of play. The Roadrunners faced 63 seconds of a five-on-three advantage for the Condors but were able to shut it down to keep the score knotted at one entering the middle frame. Tucson retook the lead at 2-1 in the early goings of the second period with a goal by another former Condor, third-year Roadrunner Cameron Hebig for his first of the season. The Roadrunners took the first multi-goal lead of the night less than five minutes later the power-play, as Laurent Dauphin buried the puck in his return to the Old Pueblo. In his last Home Opener with Tucson on October 6, 2018, Dauphin had a goal and an assist in a 6-4 win over San Diego. The Roadrunners kept it rolling with another power-play goal, this time scored by the longest-tenured Roadrunner, defenseman Cam Dineen. Forward Travis Barron made sure the Tucson Arena crowd was still enjoying Opening Night, as the second-year Roadrunner dropped the gloves with Bakersfield’s Luke Esposito before motioning to the crowd on his way to the locker room. Despite taking place with 15 seconds left in the middle period, Barron’s fight wasn’t the last action of the frame. With just under eight seconds to play in the period, forward Mike Carcone unleashed a shot that found the back of the net to extend Tucson’s lead to 5-1 entering the final 20 minutes of play. Carcone’s goal was the third-straight power-play strike on the Roadrunners third consecutive chance on the man-advantage. The Bakersfield Condors got back on the scoreboard with 11:51 gone by in the final frame with their first even-strength goal of the night and first score since 8:48 into the opening period. The Condors continued to show life less than three minutes later with a power-play goal, cutting the Roadrunners lead to 5-3 with 5:13 remaining in regulation. Still holding onto a two-goal lead, the Roadrunners faced another Bakersfield man-advantage and an eventual empty-net situation as the Condors tried to erase Tucson’s lead. The Roadrunners were able to keep Bakersfield at bay and came away with a 5-3 Opening Night victory to improve to 2-1-0-0 on the season.