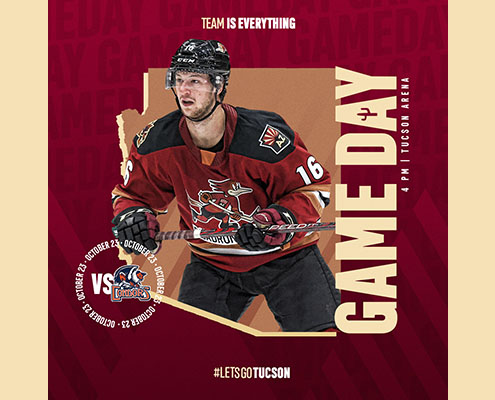 The Roadrunners wrap up their first home stand of the season Sunday afternoon at the Tucson Arena with the second of two matchups with the Bakersfield Condors, AHL affiliate of the Edmonton Oilers. Tucson improved to 2-1-0-0 with a 5-3 win over Bakersfield on Saturday, handing the Condors their first regulation loss of the season. The Roadrunners will look to sweep the Condors for their fourth-straight win at home dating back to April of last season.

Three Things
1) Tucson took the series opener against the Condors by a score of 5-3, backed by a four-goal second period to break a 1-1 tie after the first period. Roadrunners Captain Adam Cracknell opened the scoring in the contest with a goal against his former team just 53 seconds into the opening frame. The next score for Tucson was scored by another former Condor in forward Cameron Hebig to retake the lead at 2-1 early in the middle period. The next goal for the Roadrunners was scored on the power-play by Laurent Dauphin, back with the organization that drafted him for the first time since the 2018-2019 campaign. Returning Roadrunners Cam Dineen and Mike Carcone added on in the second to give Tucson the largest lead of the night at 5-1. Bakersfield threatened to come back in the third period with a pair of late goals, but the Roadrunners held on to secure the 5-3 win on Opening Night.

2) At the forefront of Tucson’s series-opening win were their special-teams units. The Roadrunners power-play exploded for three-straight goals on three consecutive trips to the man-advantage in the second period, as the team finished three-for-six overall on the night. A big reason for Tucson and Bakersfield entering the second period tied at one was the Roadrunners penalty-kill efforts that prevented the Condors from scoring on a 63-second long five-on-three situation late in the opening frame. Tucson finished the night overall five-for-six on the penalty-kill, as their overall penalty-kill percentage stands at 86.7% through three games this season.

3) Nine different Roadrunners skaters recorded a point in Saturday’s win over the Condors, with four of the nine finishing the contest with two points. Mike Carcone tallied a goal and two assists for his second consecutive multi-point performance, and he was joined by Laurent Dauphin and Cam Dineen who each posted a goal and an assist. The final two-point performance belonged to third-year Roadrunner Jan Jenik with a pair of assists. Through three games this year, Tucson has scored nine goals with each coming from a different player.

“We’re the heart of the team and we’re going to get things going. Everyone can contribute in their own ways, but a lot of stuff goes through the guys that have been around and know the system. It’s early on, we have a lot of new guys, and we have to show them the way.”

Defenseman Cam Dineen on returning Roadrunners like himself being key to Tucson’s success early in the season.

Number to Know
16 – The number of saves made by Roadrunners netminder Ivan Prosvetov in the first period of Saturday’s 5-3 Opening Night win over the Bakersfield Condors, the most in a single frame for Prosvetov since February 26, 2022, against the Ontario Reign. After surrendering just one goal on 17 shots in the first 20 minutes, the Roadrunners limited the Condors to 14 shots across the final two periods of play.

We’re Doing It Live
Today’s game will be broadcast live on AHLtv, as well as on the radio on FOX Sports 1450AM and the iHeartRadio app. Coverage will start at 3:45 p.m. with Roadrunners Warm-Up hosted by Jimmy Peebles, before “Voice of the Roadrunners” Adrian Denny has all the action from the Tucson Arena.