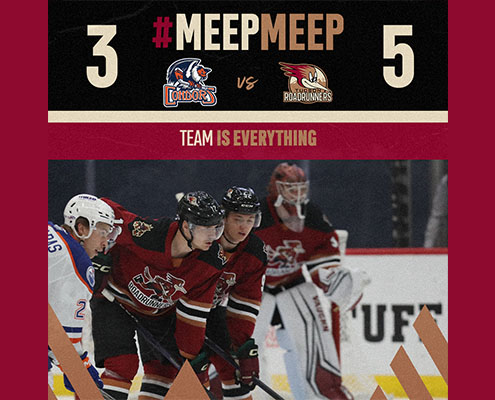 Tucson, Arizona – The Tucson Roadrunners wrapped up their opening home stand of the season Sunday with their second of two meetings with the Bakersfield Condors. Roadrunners forward Laurent Dauphin posted the first hat trick of his AHL career as Tucson won by a count of 5-3 for the second-straight game. The win gave the Roadrunners a two-game sweep of the Condors and improved their overall record on the season to 3-1-0-0. Goaltender Jon Gillies made his home debut as a Roadrunner and earned his first win for Tucson with 23 saves.

Roadrunners forward Laurent Dauphin gave Tucson all three of their multi-goal leads as he netted the first hat trick of his AHL career. Dauphin finished the weekend with four total goals after finding the back of the net on the power-play in Saturday’s series opener. The 27-year-old is back with the organization that drafted him in 2013 for the first time since the 2018-2019 campaign.

HOME IS WHERE THE HAT TRICKS ARE – Laurent Dauphin’s hat trick in Sunday’s series finale gave the Roadrunners their second-straight year with a hat trick scored in their Home Opening series. Exactly one year ago, forward Ben McCartney lit the lamp three times in his season debut against the Texas Stars on October 23, 2021. The win also gave Tucson their fourth Home Opening series sweep in franchise history out of five opportunities.

Roadrunners forward Hudson Elynuik opened the scoring for Tucson in Sunday’s series finale with the Bakersfield Condors, becoming the tenth different player to score each of the Roadrunners first ten goals on the season. Jean-Sebastien Dea broke the streak just 1:24 later with his second goal of the year, followed by Laurent Dauphin scoring a hat trick to bring his season total to four goals.

Roadrunners Head Coach Steve Potvin on Tucson’s ability complete the weekend sweep on Sunday against a Condors team hungry for a win after their loss Saturday:

“I think Bakersfield came out really hungry and determined. They weren’t happy with [Saturday’s] narrative, and they came out pretty hard. They had nine shots in the first nine minutes, and we had to weather the storm. Our guys did that, and by the end of the period, we turned the narrative around and we were up in shots. That showed a lot of leadership and showed a lot of character and showed a lot of poise. I’m happy for our guys.”

The first period of Sunday’s rematch between Bakersfield and Tucson began as a defensive battle, before the Roadrunners broke through with a goal by Hudson Elynuik to take a 1-0 lead 16:12 into the opening frame. The goal was the second-year Roadrunner’s first of the season and gave Tucson their tenth goal of the season scored by ten different players. That trend ended less than a minute and a half later when Jean-Sebastien Dea became the first Roadrunner to reach two goals on the season. The score came just seven seconds into a Tucson man-advantage, giving their power-play unit their fourth goal over their last three periods of play dating back to Saturday’s series opener. Assisting on Dea’s goal was third-year Roadrunner Mike Carcone, making him one of ten players in the American Hockey League to reach five assists on the season. The score by Dea gave Tucson a 2-0 cushion as they reached the second period. Bakersfield got on the board early in the middle frame with their first goal of the evening, cutting the Roadrunners advantage to 2-1. Tucson netminder Jon Gillies had stopped the first 11 shots faced prior to the goal in his home debut for the Roadrunners. The Roadrunners regained their two-goal lead with 8:54 gone by in the middle period, as Laurent Dauphin gave Tucson a 3-1 advantage for the second consecutive contest after a power-play goal in Saturday’s series opener. The Condors responded once again with their second shorthanded goal of the weekend to pull back to within one just under three minutes after Dauphin’s goal. The Roadrunners came out firing in the third period looking to regain a multi-goal advantage. It was once again Laurent Dauphin giving Tucson a crucial insurance goal with his second goal of the evening and third of the weekend to make it a 4-2 lead for the Roadrunners in the first minute of the third period. The Condors once again answered back with their first power-play score of the contest, reducing Tucson’s lead to 4-3 with 12:50 remaining in regulation. Still trailing by a goal, Bakersfield pulled goaltender Olivier Rodrigue with just under two minutes on the clock. A Laurent Dauphin score on the empty net completed the hat trick for the 27-year-old and secured a second-straight 5-3 win for the Roadrunners to complete the two-game sweep.