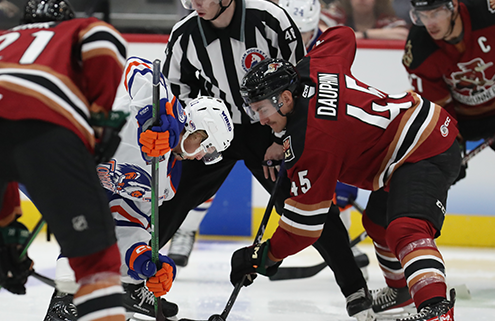 SPRINGFIELD, Mass. – The American Hockey League announced today that Tucson Roadrunners forward Laurent Dauphin has been selected as the Howies Hockey Tape/AHL Player of the Week for the period ending October 23, 2022.

Dauphin registered four goals and an assist in two games, including his first career hat trick, to help the Roadrunners to a sweep of their home-opener weekend against Bakersfield.

Dauphin picked up his first points of the season on Saturday night, recording a goal and an assist during a four-goal second period to spur Tucson on to a 5-3 win over the Condors. Then on Sunday, Dauphin scored three times for the first hat trick of his pro career as the Roadrunners earned another 5-3 victory.

An eighth-year pro, Dauphin has skated in 320 career AHL games with Tucson, Laval, Milwaukee, Rockford, Springfield and Portland, totaling 82 goals and 103 assists for 185 points. The native of Repentigny, Que., signed as a free agent with Arizona on July 13, 2022, returning to the organization which had selected him in the second round of the 2013 NHL Draft. In 73 career NHL contests with the Coyotes and Montreal Canadiens, Dauphin has recorded seven goals and nine assists.

Dauphin appeared for the Roadrunners their first three season totaling 89 games with 28 goals and 35 assists for 62 points while also serving as an alternate captain.

The Roadrunners are off to a 3-1 start and will open a four-game road trip Friday and Saturday in San Jose before continuing to Calgary for games Wednesday, November 2 and Friday, November 4.

Tucson will return home Friday, November 11 and Saturday, November 12 as Coachella Valley will make their first trip to the Old Pueblo. Ticket and more information can be found at TucsonRoadrunners.com/Fun.

Tucson Roadrunners Road Ahead: Rounding Out October On The Road
Scroll to top