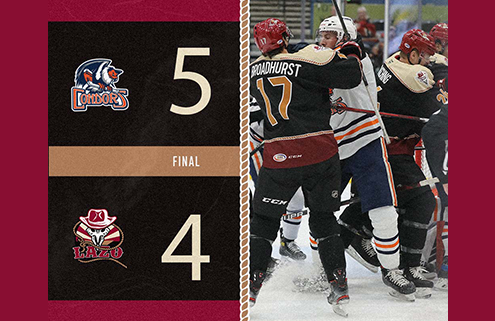 Tucson, Arizona – The Roadrunners continued their three-game home stand against the Bakersfield Condors Friday night at the Tucson Arena, as the team donned their El Lazo de Tucson alternate identity, celebrating the rich culture and heritage of Southern Arizona. Tucson scored three special-teams goals in the contest, including a pair of power-play strikes in the first period by Jan Jenik and Cameron Hebig. The Roadrunners rallied late with a pair of goals in the final 7:34 of regulation but fell just short to the Condors by a score of 5-4.

Tucson went on the first power-play of the contest with 6:14 gone by in the opening frame and used it to put solid pressure on the Condors defense. Mike Carcone had a one-time look at the net but narrowly hit the post, keeping the game scoreless after the opportunity. Bakersfield had their first chance on the man advantage just before the midway point of the first period and scored their second power-play goal of the series, taking a 1-0 lead. The Roadrunners went back on the power-play with seven minutes remaining in the first and this time found the back of the net, tying the game at one. Jan Jenik scored his team-leading sixth power-play goal of the season and became the third Roadrunner to reach ten goals on the year. The Condors retook the lead with just under three minutes to play in the period, the first even-strength goal in the contest and first AHL goal for Dylan Holloway. 11 seconds after taking the lead, Bakersfield was called for a hooking penalty, sending Tucson back on the power-play for the third time. The Roadrunners once again delivered on special teams, with Cameron Hebig hammering home the point-blank shot to tie the game up at 2-2 with 1:21 left to go in the first period. The Roadrunners and Condors entered the middle 20 minutes of action still even at two, but Bakersfield took their third lead of the night just 1:31 into the period with an odd-man attack. Travis Barron got into it with Bakersfield’s Vincent Desharnais near center ice, with the pair each earning five minutes for fighting. The exchange marked Barron’s second fight of the series, after he dropped the gloves with Luke Esposito in the series opener Wednesday night. With five total goals in the first 21:31, neither team had scored back-to-back goals and the rest of the second period was without a goal. The Roadrunners trailed 3-2 as they began the final 20 minutes of regulation on a power-play that carried over from the end of the middle frame. The man advantage wore off, but Tucson continued to apply pressure on offense. The Condors extended their lead to 4-2 with a puck that bounced hard off the back wall onto the stick of a Bakersfield skater. The goal marked the first back-to-back scores by either team in the contest and put the Roadrunners down by a pair with 15:39 remaining in the third period. Not long after the goal, Tyson Empey dropped the gloves with Bakersfield’s Michael Kesselring for his fourth bout of the season. The Condors briefly extended their lead to 5-2, but a Cam Crotty goal 15 seconds later kept the Roadrunners deficit at two. Crotty’s goal was his first of the year and gave Cameron Hebig his third multi-point night of the season with an assist. Tucson saw an opportunity with a five-on-three power-play but couldn’t get a shot past Bakersfield backstop Alex Stalock before they were called for a penalty of their own. That didn’t stop the Roadrunners from getting to within a goal, as Hudson Fasching netted a shorthanded score for his fifth of the season. With only 1:11 still on the clock, Tucson came up just short, as the Condors snuck away with the 5-4 victory in a game that came right down to the wire. Tucson goaltender Josef Korenar ended the night with 13 saves.

“I think it’s a hard-working group. They’re extremely resilient, they come in every day focused and ready to get better. That’s part of our mission here, we have to find a way each day to get better.”

Roadrunners Head Coach Jay Varady on the mentality of the team after a hard-fought battle with the Bakersfield Condors.

CROTTY COLLECTS HIS FIRST – Tucson Roadrunners defenseman Cam Crotty scored his first goal of the season Friday night against the Bakersfield Condors. The 22-year-old is the longest-tenured defenseman on the Roadrunners active roster, after playing 32 games in his rookie campaign last season.

Watch Tucson Roadrunners forward Jan Jenik open the scoring for the Roadrunners in the first period of Friday’s matchup with the Bakersfield Condors. The goal marked Jenik’s tenth goal of the season and sixth while on the power-play, leading the Roadrunners in both categories.

Tucson Roadrunners forward Mike Carcone shoots in the puck in Friday’s contest with the Bakersfield Condors. Carcone assisted on a Jan Jenik goal in the first period of the game, giving the 25-year-old his eighth-consecutive outing with a point, a career-high.