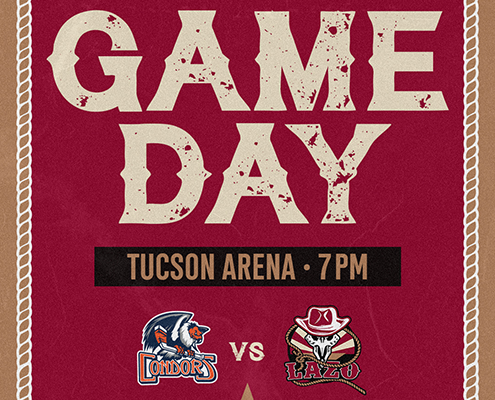 The Tucson Roadrunners continue their series with the Bakersfield Condors Friday night at the Tucson Arena. The Roadrunners will look to even up the series at one win apiece, after the Condors took the opener on Wednesday. Friday’s game will feature El Lazo de Tucson, the Roadrunners special identity celebrating the rich history and culture of Southern Arizona. Roadrunners Mascot Dusty will once again take on his “El Polvo” alter-ego, meaning “The Dust” in Spanish.

Three Things
1) The Roadrunners had three skaters extend their scoring streaks to five games or more in the series opener with the Condors on Wednesday. Forward Mike Carcone scored his tenth goal of the season to open the scoring for Tucson, extending his point streak to a career-high seven games. Assisting on the goal were rookies Matias Maccelli and Vlad Kolyachonok, as each recorded a point for the fifth-straight outing. Maccelli and Carcone are tied for the team lead in goals, while Maccelli leads all AHL rookies in assists with 24.

2) Returning to the Tucson lineup on Wednesday was defenseman Cam Dineen. Dineen made his first appearance with the Roadrunners since October 24, after a 14-game stint in the NHL with the Arizona Coyotes. The 23-year-old scored a power-play goal in the second period, giving him four points in five games with Tucson on the season. Dineen was one of six Roadrunners to make their NHL debuts this season along with Dysin Mayo, Ben McCartney, JJ Moser, Mike Carcone, and Vlad Kolyachonok. After his performance with the Roadrunners on Wednesday, Dineen was recalled to the Coyotes Thursday morning.

What’s The Word?
Roadrunners forward Terry Broadhurst on bouncing back this weekend after the Condors took the series opener Wednesday night:

“For us, it’s a growing process. I think there are some areas we can clean up but we’re doing good things. Sticking with the program, having more trust, and even being simpler will open stuff up for us. We have to keep our heads up and we have to keep at it.”

Number to Know
6 – The number of power-play goals scored by the Roadrunners in their last five home games dating back to January 4 against Stockton. Tucson added the sixth score in the series opener against Bakersfield on Wednesday, when defenseman Cam Dineen lit the lamp in the second period for his second goal in five games with the Roadrunners on the season.

We’re Doing It Live
Today’s game will be broadcast on AHLtv, as well as on the radio on Fox Sports 1450AM, or on the iHeartRadio app. Coverage begins at 6:45 p.m. MST with Roadrunners Warm-Up, as Jimmy Peebles gets you ready for the game before “Voice of the Roadrunners” Adrian Denny has the call at 7:00 p.m. live from Tucson Arena.