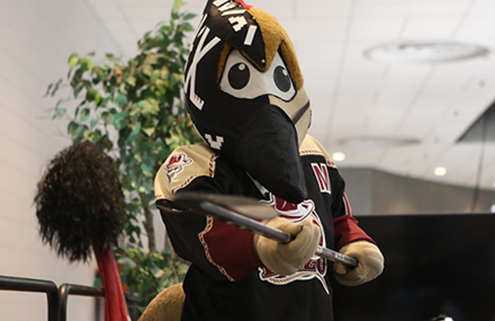 Tucson, Arizona – The Tucson Roadrunners will host their next El Lazo de Tucson Friday night at 7 p.m. and Star Wars Night Saturday at 7 p.m. as they continue their series with Bakersfield at Tucson Arena.

Friday, the Roadrunners will also be offering $2 Soft Drinks, $3 Hot Dogs and $3 Draft Beers during the El Lazo celebration that will feature another special performance by Mariachi Los Diablitos de Sunnyside High School as 92.1 y 95.7 La Caliente will be outside Tucson Arena with their playlist rolling prior to the game with the team’s Mascot Dusty will once again assuming his El Lazo identity as El Polvo, meaning “The Dust” in Spanish. The first 1,500 fans will also receive a Roadrunners El Lazo de Tucson poster when entering the arena and Roadrunners Give Back, a branch of the Arizona Coyotes Foundation, will be selling signed El Lazo Mystery Pucks for $25. All Roadrunners players signed three pucks which were then wrapped for the mystery.

About El Lazo de Tucson
The Roadrunnners ‘El Lazo’ identity is a continuing effort to embrace all that is Southern Arizona and the history and culture of the community. The El Lazo mark features the skull of a Roadrunner in celebration of Dia de Los Muertos and the All Souls Procession (a public ceremony began in Tucson in 1990). El Lazo, Spanish for ‘lariat’ or ‘lasso’, is taken from the City of Tucson’s city seal that ties together the modern city and the historic area that is now Tucson. The Tucson Rodeo and Parade is held every February and celebrates the ranching history of the area. The skull in the logo is wearing a cowboy hat to reflect this historic tradition in Southern Arizona. The team unveiled their El Lazo identity in 2020 and skated in their El Lazo jerseys for three games during the 2020-2021 season.  2021-2022 will mark the team’s second season featuring games in their El Lazo identities. The final El Lazo de Tucson of the regular season will be on Friday, April 1.

Saturday night, the Roadrunners team with Rock 102.1 KFMA and 94.9 Mix FM for Star Wars night and the first 250 kids to come in a Star Wars themed costume will receive a pair of tickets to the team’s Youth Jersey Giveaway game on Saturday, February 19. In addition Saturday, Family Packs are available that include four tickets and $20 in Concessions at TucsonRoadrunners.com/Family. Star Wars characters will be on hand including: Darth Vader, Storm Troopers, Princess Leia, Kylo Ren and many many more. There will also be a photo booth for fans to get photos with characters.

To wrap up Saturday, the team will invite several hundred local Boy Scouts, who enjoyed the game on Saturday night onto the ice for a postgame puck shot to conclude Star Wars Night. Interested Boy Scouts who still want to get involved can CLICK HERE.

And finally this weekend, the Roadrunners will be completing their January Alumni Jersey auction by auctioning off past Roadrunners game worn jerseys from fan favorites currently with the Coyotes to benefit the Matt Shott Memorial Fun which supports growing the game of hockey for youth in Arizona. The alumni Roadrunners jerseys include: Dysin Mayo, Kyle Capobianco, Cam Dineen and Barrett Hayton. The online auction can be found at TucsonRoadrunners.com/Skatin. Matt Shott, the Coyotes Vice President of Hockey Development, passed away on December 19 after a courageous battle with cancer.

Ten55 Brewing Company is still offering a special deal for the Roadrunners final three January home games this weekend against the Bakersfield Condors. Fans can purchase two game tickets and receive a $25 gift card to Ten55, a $125 value for just $49. More information on this special offer can be found HERE.